written by admin March 3, 2020
This article is also available in the following languages:

CAF President Ahmad Ahmad is set to tour Tanzania for 3 days at the invitation of Tanzania Football Federation (TFF). He is set to among other things, watch the mouth watering Dar Derby, pitting perennial arch-rivals Yanga vs Simba SC. It has been announced that Ahmad will be in Tanzania from the dates of March 7th to March 10th.

This is despite a statutory requirement for him to remain in Cairo and assist the visiting mission of the PWC auditors, whom he has been avoiding, leaving Secretary General Mouad Hajji to handle their itinerary and refusing to pick his calls.

Upon the realisation that they want to throw him under the bus, Mouad Hajji sought clarification from FRMF (Morocco FA), and President Fouzi Lekjaa, who also doubles up as the Chairman of the CAF Finance Committee, advised him to resign, because the matter was already bringing tension in the Kingdom of Morocco.

It has been cited as unfortunate that Ahmad continues jet-setting in African capitals, enjoying privileges and benefits of the CAF Presidency, while FIFA President Gianni Infantino has openly confirmed that he is under an ethics investigation. Best Practice dictates that someone under investigation should step aside so as not to hinder any probe on him or her.

In 2018, CAF President Ahmad Darw attended a regional CECAFA (regional confederation of East & Central Africa) tournament and congress in the same Daresalam capital of Tanzania and was accused of reckless spending, after spending $20,000 in a night club, after ordering a bottle of champagne for every lady at the overpriced Havoc Club located in the Sea Cliff area of Dar. 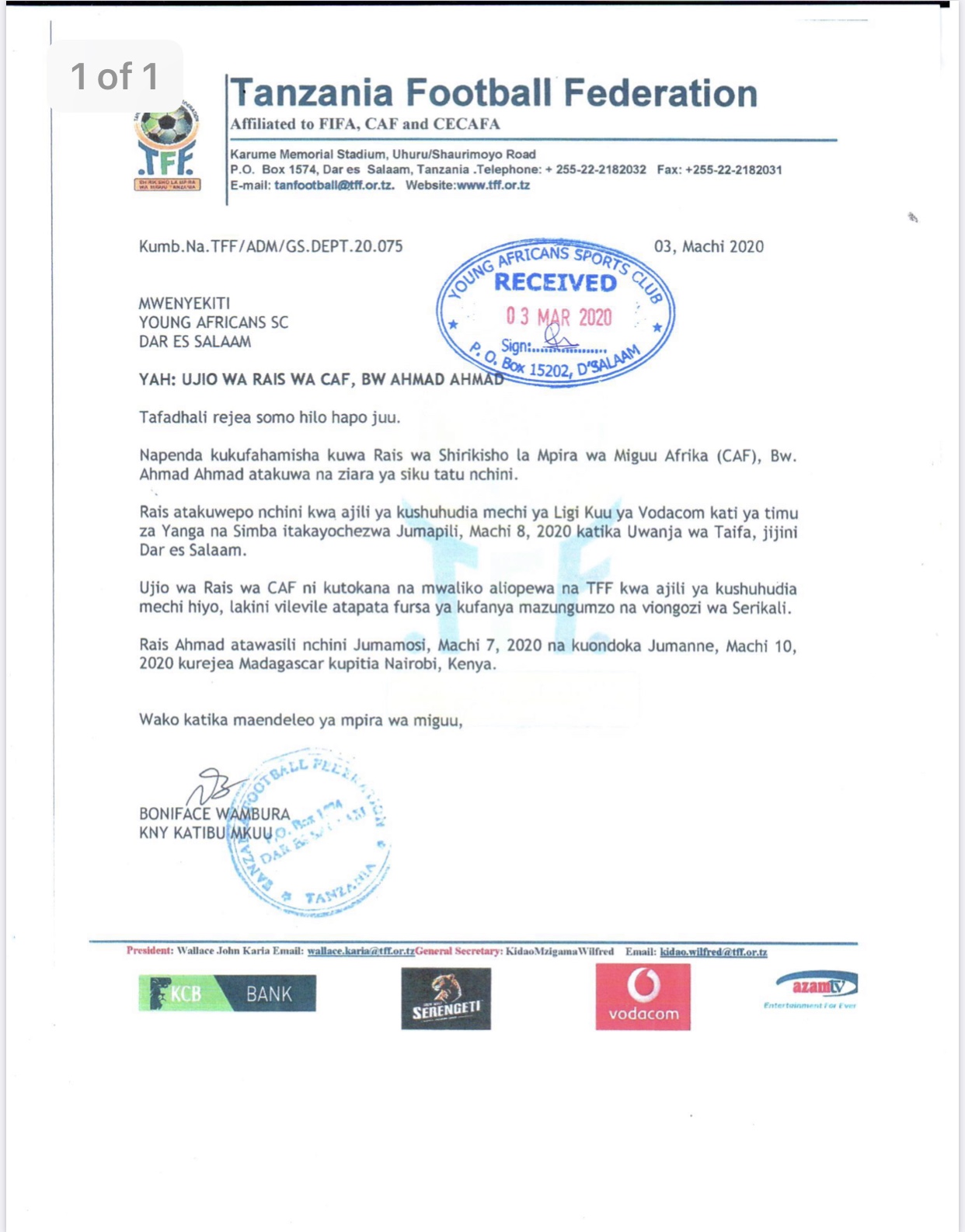 Circular from Tanzania FA to host club Yanga SC confirming the presence of CAF President Ahmad Draw at the Dar Derby, despite an active Ethics investigation.

Gianni Infantino himself faced severe criticism today at the UEFA Congress, where President Aleksander Ceferin censured him publicly infront of the membership, for usurping the role of “god” instead of custodian of the game.

Infantino together with Real Madrid President Fiorentina Perez have been mulling the idea of a super league, which would render UEFA’s premier tournaments impotent and leave the confederation financial crippled.

“No football administrator, no matter the size of the ego should think we are the stars of the game. We are only the guardians of the game. Overturning the game’s historic structures like promotion, relegation and open leagues would be a sentence to our sport and trust me, we will not allow it” UEFA President Aleksander Ceferin told Gianni Infantino infront of a packed Congress.

This has been the surest indicator that a plan for a no-confidence motion mooted against the President of FIFA, are not a rumour, but an active possibility which may be implemented sooner rather than later.

With his political options limited, Gianni Infantino is now faced with the reality that Ahmad Darw is a liability, who must be done away with together with his coterie of insiders beginning with Moroccan FA President Fouzi Lekjaa.

This article is also available in the following languages:
0 comment
0
FacebookTwitterPinterestEmail

Why CAF Secretary General Mouad Hajji Resigned In A Huff