written by onyii January 19, 2020
This article is also available in the following languages:
FacebookTwitterInstagramTelegramEmail 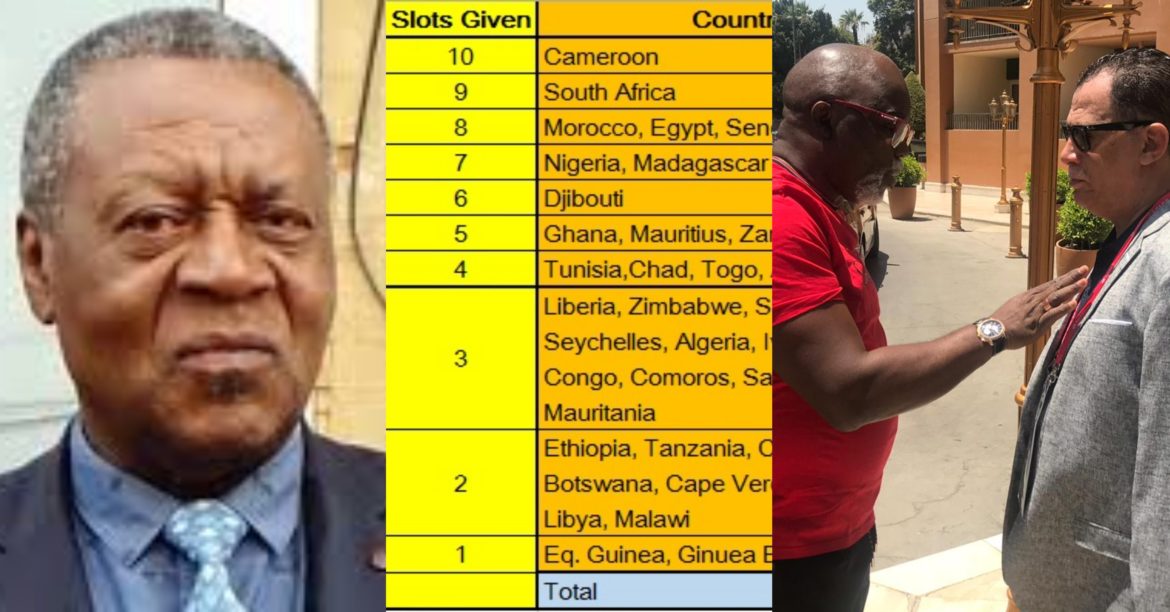 The World is only now seeing CAF appointments to its standing committees which were granted for the cycle 2019 – 2021 in compliance with CAF statutes.

Article 23 (6) of the CAF statutes states that “upon a proposal by the President, it shall appoint the Chairmen, Deputy Chairmen and Members of the Standing Committees, as well as set up new Ad Hoc Committees if the need arises”.

Article 16(2) also states that “Standing and Ad Hoc Committees shall advise and assist the Executive Committee in the fulfilment of its duties”.

We recently gave a glimpse into the sordid World of one ad hoc committee of CAF by the name “panel of media experts” which apparently has done little to offer guidance and support to the CAF Executive committee (Exco) as envisaged by Article 16(2).

This time around, apparently in anticipation of the 2021 CAF Presidential elections, CAF has gone out of its way to redistribute the seats in various Standing committees, along voting lines and to reward cronies who may have served the CAF kakistocracy especially in that very turbulent 2019 period.

CAF therefore granted 201 slots in 15 standing committees (excluding the Exco) to its 54 members and one associate member (ReUnion).

Sadly, 27 appointments out a possible 54 CAF members translates to a 50% representation on a single committee. What is so important in these committees to warrant all these people, most of whom lack the requisite expertise to sit on the committees, to be appointed to them?

We postulate that a meeting of between 25 to 27 members with additional technocrats from the CAF Secretariat would actually be a seminar, and not designed to make critical decisions for the management of such a critical tournament.

For instance, why would a legal or technical committee be composed of 17 and 16 people respectively as is the case here? How many lawyers does it take to screw on a light bulb? Last year alone, cases from Africa to the Court of Arbitration for Sport were at a record high, signalling the impotence of the legal committee in CAF, headed by fence sitter Augustin Senghor President of Senegal FA, who is quietly waiting to be anointed as President by his compatriot Fatma Samoura.

In a step-change from the previous composition of these standing committees, Cameroon emerges as a major winner after being allotted a whole 10 appointments in 8 separate committees. 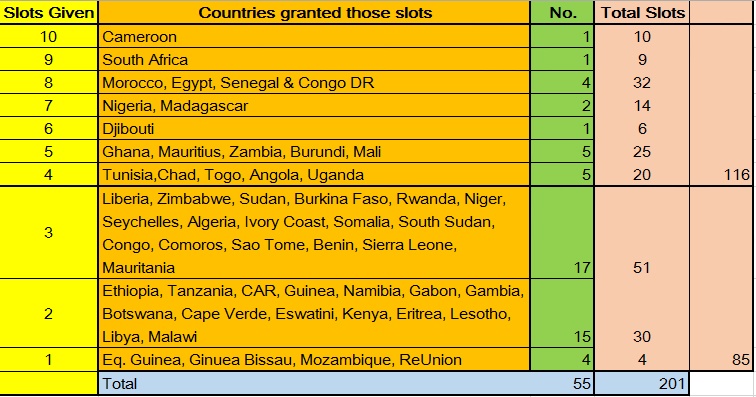 South Africa follows closely with 9 slots which is a slight increase from the previous 8 slots and probably in repayment for the treachery of SAFA President Danny Jordaan during the no-confidence plot last July.

Morocco, Egypt, Senegal and Congo DR also get a massive boost each with 8 slots on various committees while Nigeria and Madagascar each retain 7 slots.

Morocco witnessed a reduction in the number of slots made available to them following massive outcry over the last two years when they held down at least 12 committee slots.

Nigeria, despite their FA President Amaju Pinnick having fallen out of favor with the CAF top brass and even being ejected from the CAF 1st Vice-Presidency, appears not to have come out of it the worse for wear, dipping slightly from the previous 9 slots to a respectable 7 appointments. 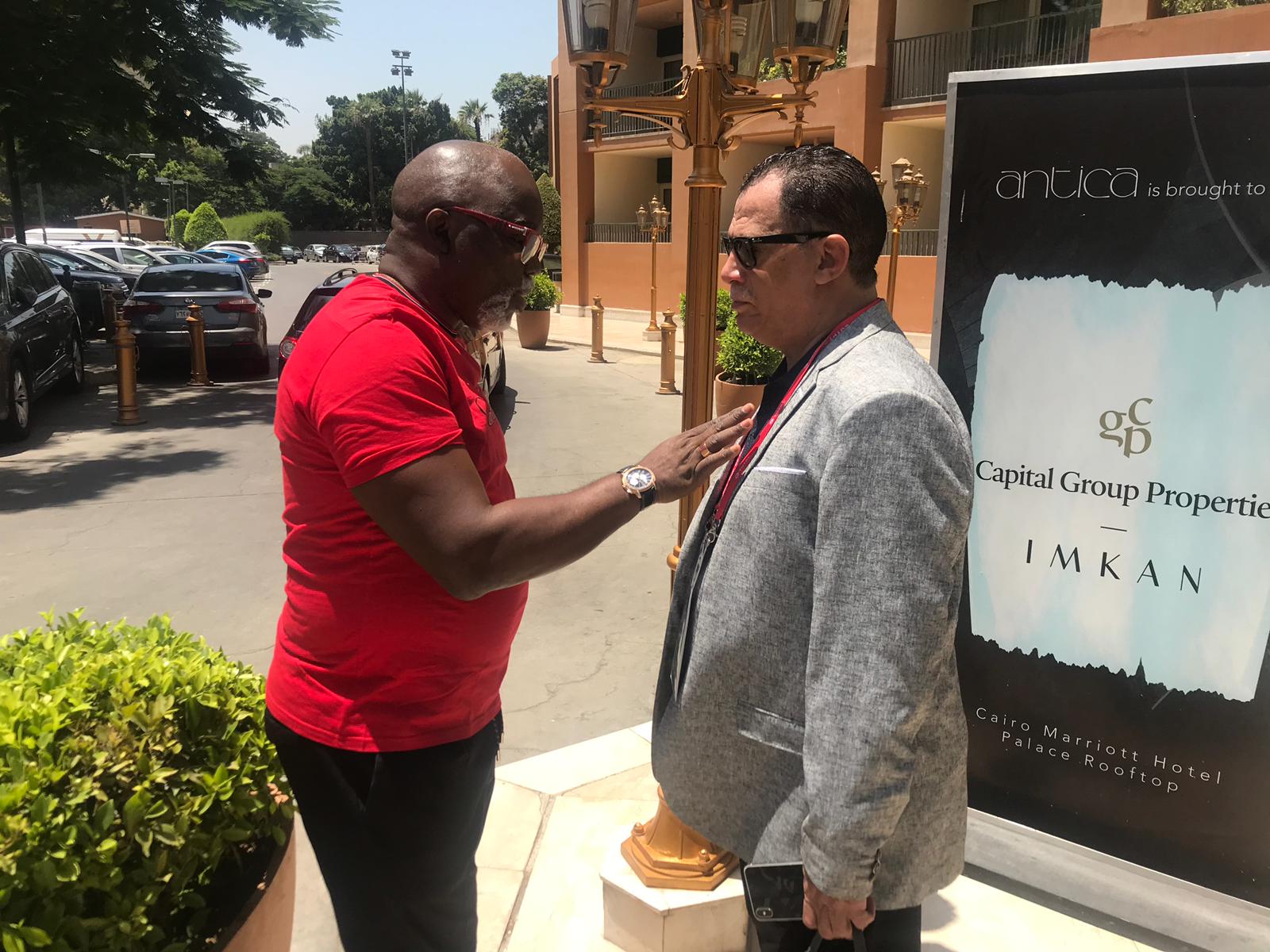 This might signal a new strategy by CAF President Ahmad to keep his friends close but maintain a grip on his enemies.

The obvious question on everyone’s mind however is, what the hell has Cameroon done to warrant 10 slots in the various committees? Aren’t these the same guys who have just come from 2-years under Normalization committee? Haven’t they proved incapable of hosting the AFCON, forcing it to be rescheduled at least once?

Cameroonian football has largely been on a downward spiral since the heady days of Italia ’90 where the Indomitable Lions gave a great account of themselves. Their only recent achievement has been the fluke win of the 2017 AFCON in Gabon.

To imagine that Cameroon will host this year’s edition of CHAN as a dress rehearsal for the 2021 AFCON is of itself cringeworthy, noting too that the AFCON 2021 has been brought forward a full 6 months than earlier anticipated.

Even the former head of the Cameroon Normalization committee, Happi Dieudonné, has made it into the CAF list of appointments as the Vice-President of the CAF Governance committee. 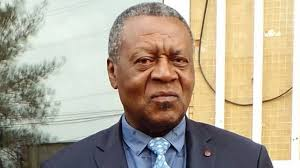 Nothing illustrates the absolute inequality in CAF than the distribution of CAF standing committee seats among members who have equal votes on the CAF General assembly.

Have Ahmad and his troops not only purchased the votes of African FA Presidents with an annual direct stipend of $20,000, but have also collected each of their brains and kept them in his desk drawer?

How can such an inequality be allowed to continue within CAF?

The Presidents from FAs that have a high number of standing committee appointments, have a distinct political advantage and re-election prospects than those with only one or two appointments.

These FA Presidents are able to go back to their voting members and announce triumphantly that they have brought home a specifically high number of CAF appointments in the same way that a father will arrive home to his wife and children, carrying a large loaf of bread and several packets of milk after a hard day working in a Zambian copper mine.

One of the big losers in this reshuffle is former head of the Referees committee Souleiman Waberi from Djibouti who was booted out of the lofty position and essentially down-graded to a mere Vice-President of the Youth AFCONs committee.

Chairmen and Vice-Chairmen of the CAF standing committees

This follows a letter of complaint that he unwisely sent to CAF President Ahmad late last year decrying a decision to make a raft of changes to Refereeing on the continent with neither his input nor consultation.

Whilst normal people with a modicum of decency and self-respect would have resigned from any standing committees in the same way that Liberian Musa Hassan Bility dropped the mic, and exited the committees that he had been made a figurehead of, Waberi continues to worship his white masters at Zurich, who clearly have no interest in him nor his country.

Waberi probably thought that he would be given preferential treatment simply because he was the chief whip for Ahmad in the CECAFA region and a member of the much-maligned “Muslim Brotherhood” of CAF, which brings together the FA Presidents from Africa who profess the Islamic faith and for which reason they support Ahmad mindlessly. Waberi was also confident that he had the ear of FIFA President Gianni Infantino because he was the first to publicly declare that he would vote for him in Africa during the FIFA elections. He forgets that even former South Sudan FA President Chabur Goc Alei was also dispensed and banned despite the proximity to FIFA. 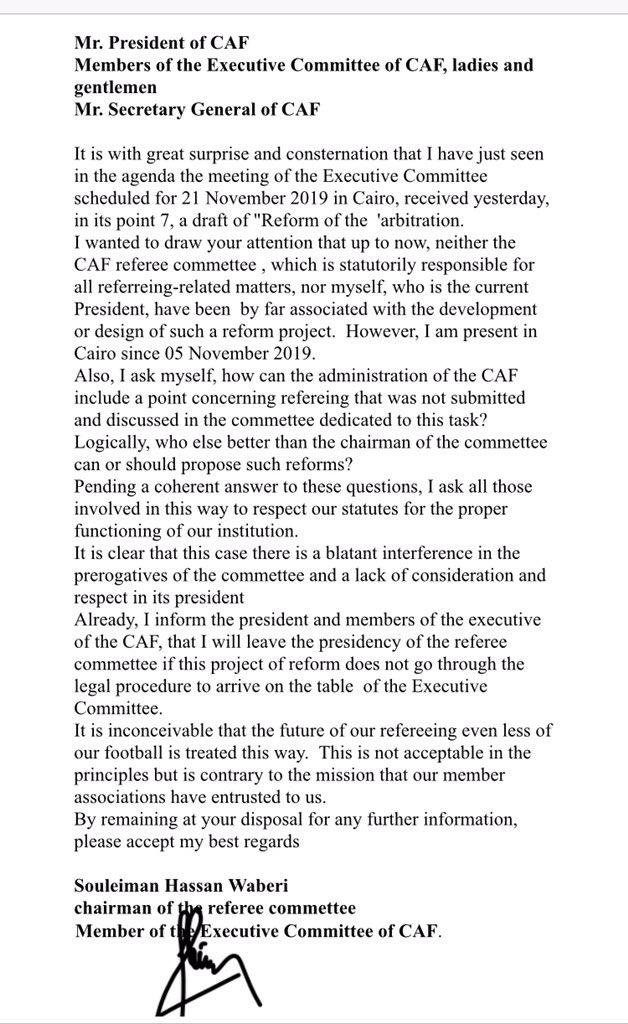 Career-limiting letter from Waberi to Ahmad

Waberi has been placed in the Youth AFCONs committee under the watchful eye of Mauritania FA President Ahmed Yahya, who many will remember for the ignominious role he played as the Match Commissioner for the abortive CAF Champions League final between Esperance of Tunisia and Wydad Casablanca of Morocco.

It was Yahya’s report to the CAF Exco and in support of Fouzi Lekjaa that gave the impetus for the misguided decision to replay the match at a neutral venue.

During the cold war, US foreign policy was very basic – The containment of Communism – today the work of Ahmed Yahya will simply be the containment of the jumpy Waberi in the run-up to the 2021 elections.

It will be remembered that Lekjaa maniacally attempted to bend the will of this committee during the ridiculous fallout in the Champions league final between his home club Wydad Casablanca and Esperance De Tunis, and his machinations were thwarted by the Court for Arbitration in Sports (CAS).

For the avoidance of doubt, Fouzi Lekjaa now has complete control of the Finance committee, the Inter-Clubs competitions committee and the Referees committee.

We expect to see an exponential increase in foolishness within these competitions, especially where latitude has to be given to Moroccan clubs because back home, Lekjaa is judged significantly by his stewardship of Moroccan clubs in the CAF club competitions.

Lekjaa faced severe backlash at home following Wydad’s loss due to the CAS decision to the point that he would lie blatantly to Moroccans that he would re-appeal and influence CAS to ensure that Wydad were declared CAF Champions.

In the end, he had the gall to make a dubious claim that CAF had some very corrupt elements, while at the same time ironically distancing himself from said corruption.

To understand just how suffocating Moroccan influence on CAF really is, aside from Mouad Hajji who is the critical GS of the organization, Lekjaa has arranged for a Moroccan, Sijilmassi Tariq, to become the Chairman of the critical Audit and compliance committee that has the singular role of creating checks and balances on the use of CAF funds. 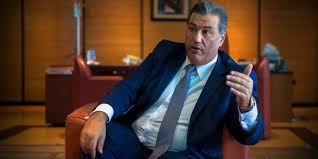 The (mis)use of CAF funds is overseen by the Finance committee headed by the self-same Fouzi Lekjaa, so how will Lekjaa’s political appointee audit or report him for the financial misappropriations currently going on in CAF?

We continue to insist that Ahmad is running a circus of clowns at CAF and every decision seems steeped in silliness and lack of forethought.

However, could the announcement of the CAF committee members have been done in anticipation of the departure of FIFA’s Fatma Samoura whose 6-month tenure expires on the last day of January?

Clearly, these committee appointments are a thinly-veiled attempt to keep African FAs on a mark-time, where they imagine that they are being included in critical functions of CAF while getting paid for it in the process, but in actual fact it is all a game of musical chairs.

Inside the this heist of African FA votes and behind a wall of smoke and mirrors, the real puppeteer (Fouzi Lekjaa) lays out his game-plan while using Cameroon and South Africa to cover his maneuvers.

For sure, Lekjaa probably knew that by giving Cameroon and South Africa the undeserved 10 and 9 CAF committee appointments respectively, when a sizable number of competent CAF members got only one or two slots would probably be the news highlight and keep the media and FIFA focus on Ahmad. All this while he would quietly be moving his pieces on the chessboard assisted by his own “general delegate” in the person of CAF GS Mouad Hajji.

Why didn’t current African Champions and World Cup representatives Algeria get more than the 3 slots allotted to them? Was Djibouti allotted 6 slots to placate Souleiman Waberi for his removal from the powerful Referees committee?

Does it make sense that a veritable “shithole country” like Djibouti with no football to speak of can be seen to have more capacity to assist the CAF Exco than Algeria and therefore gets double the number of committee appointments?

These are all the pertinent questions that should be knocking about the cranial cavities of African media and lovers of African football.

But like the joke on African football goes, if you want to see miracles, don’t go to church, go to CAF!

SOUTH AFRICA AT A CROSSROADS: FREEDOM OR IMPERIALISM FOR CAF?

IF COLONIALISM IS THE COUSIN OF RACISM,...

INFANTINO MADNESS: HOW FIFA WAS TURNED INTO...