BANANA REPUBLIC: SWITZERLAND TRIES TO REDEEM ITS ROTTEN REPUTATION AND LEGACY OF CORRUPTION

written by admin July 4, 2020
This article is also available in the following languages:
FacebookTwitterInstagramTelegramEmail 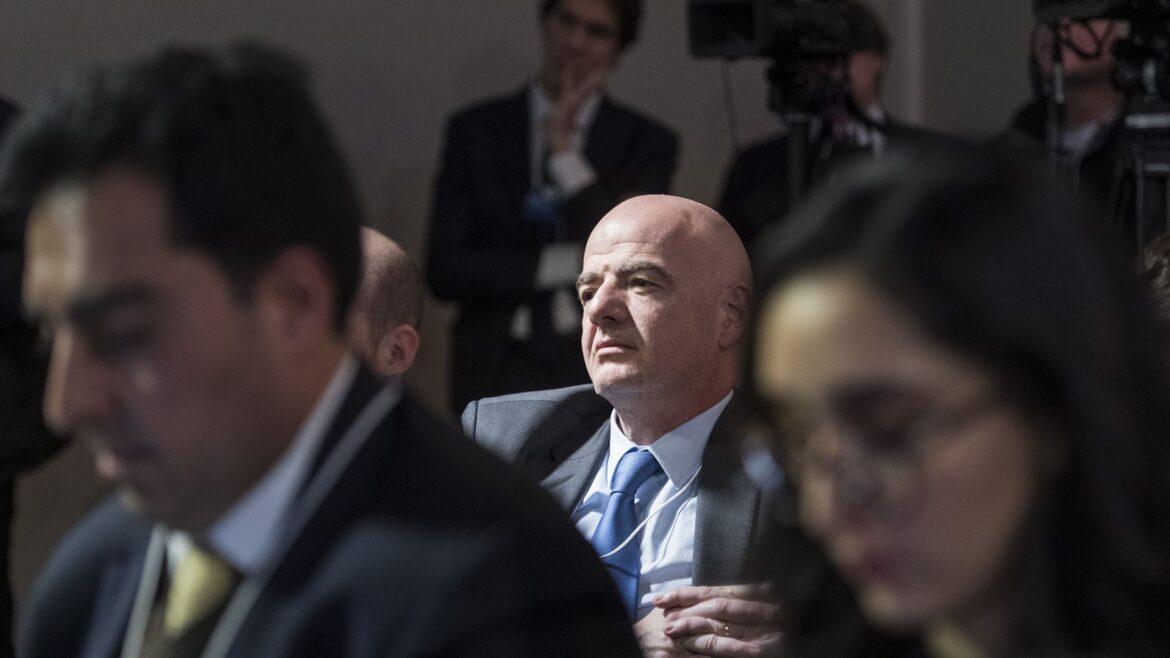 That Switzerland is the most corrupt and rotten country in the face of the earth is no longer in question or doubt. From doing business with the Nazi’s under the cover of neutrality, to laundering proceeds of crime from corrupt or war-torn countries, Switzerland is the manifestation and a convergence of all of the planet’s demonic forces, where that culture has been passed down to its citizens, who continue entrenching the ills of their forefathers with reckless abandon. It’s a country whose political leadership and citizenry have been paralysed by an ingrained culture of impunity and moral bankruptcy.

FIFA President Gianni Infantino has always been a hopelessly lame believer in influence peddling, consistently cozying up to World leaders and in some cases going out of his way to curry favor with them even if it meant subverting the cardinal principles upon which FIFA has been painfully built over a century.

In the lead-up to the 2018 FIFA World Cup in Russia, Infantino was desperate to have a Russian Deputy Prime Minister for sport, tourism and youth policy, Vitaly Mutko, join the FIFA Council.

Unfortunately Mutko had been banned in late 2017 from all future Olympic Games by the International Olympic Committee (IOC), which accepted evidence that he was centrally involved in systematic doping of athletes. 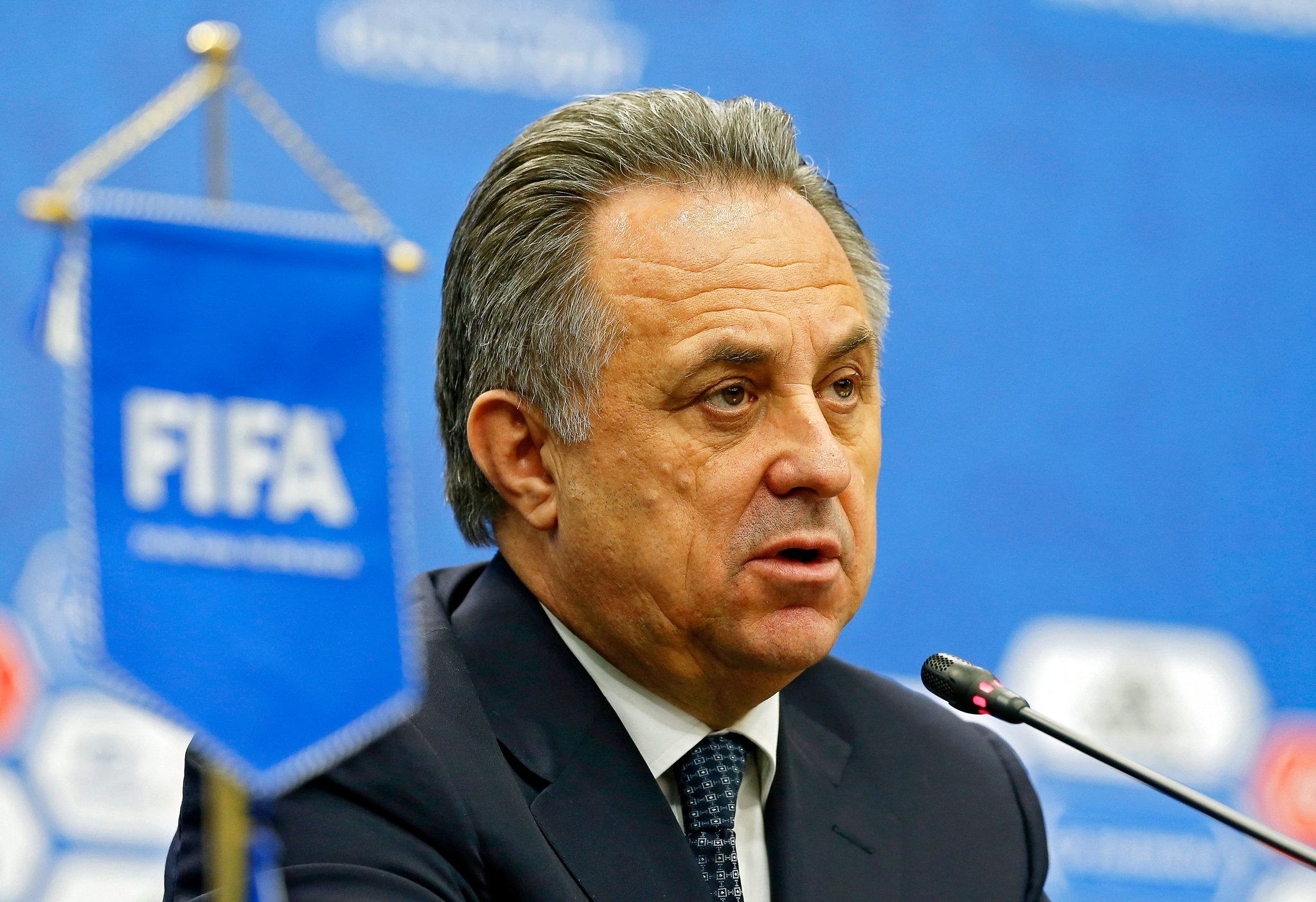 Vitaly Mutko: Infaitno really wanted him in the FIFA Council.

As a former Russian minister of sport, Mutko was alleged to have overseen the vast doping programmes before the 2012 London Olympics and 2014 Sochi Olympics but he remained president of the Russian football association until December 2018 and had resigned from the Local organizing committee (LOC) for the 2018 World Cup in order to fight these IOC sanctions.

Cornel Borbély, FIFA Ethics committee chairman for the investigatory chamber, had been investigating the alleged role of Vitaly Mutko, in the state-sponsored doping when Infantino abruptly removed the Swiss from his job in May 2017.

Miguel Maduro, the chairman of the FIFA Governance committee was also ejected from FIFA by Infantino for impeding the ascension of Mutko to the FIFA Council on the basis of these reports and in particular because he was being investigated by the FIFA Ethics committee.

It was very important for Gianni Infantino to keep Russian strongman Vladimir Putin close, and he therefore figured the easiest way was to have one of his closest friends and advisors in the FIFA Council. 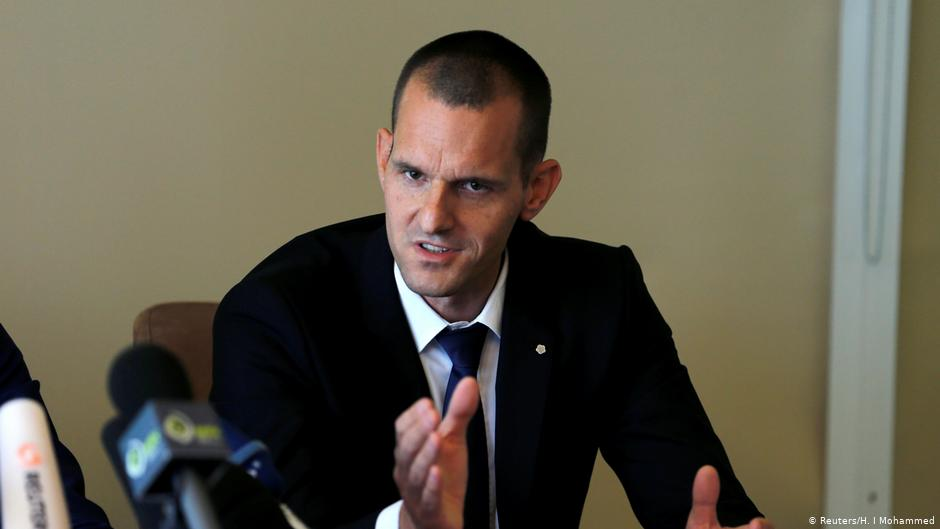 The race for the hosting rights to the 2026 FIFA World Cup was equally convoluted because Infantino simply shed any semblance of impartiality and threw his entire weight behind the United bid of USA, Canada and Mexico, ostensibly to get into the good graces of US President Donald Trump.

We saw Infantino tour the White House around September 2019, in a visit touted to be about WC 2026, Women’s football and equal pay.

However, the meeting and subsequent media briefing was a well-scripted PR opportunity to save Trump’s blushes after the US Women’s Soccer team snubbed a private invite to visit the White House after it successfully defended its World Cup title in France, in July 2019.

In this case, Infantino was a prop and a crutch for Trump, who described him as “the biggest man in soccer”, a less than flattering term by any stretch of the imagination. 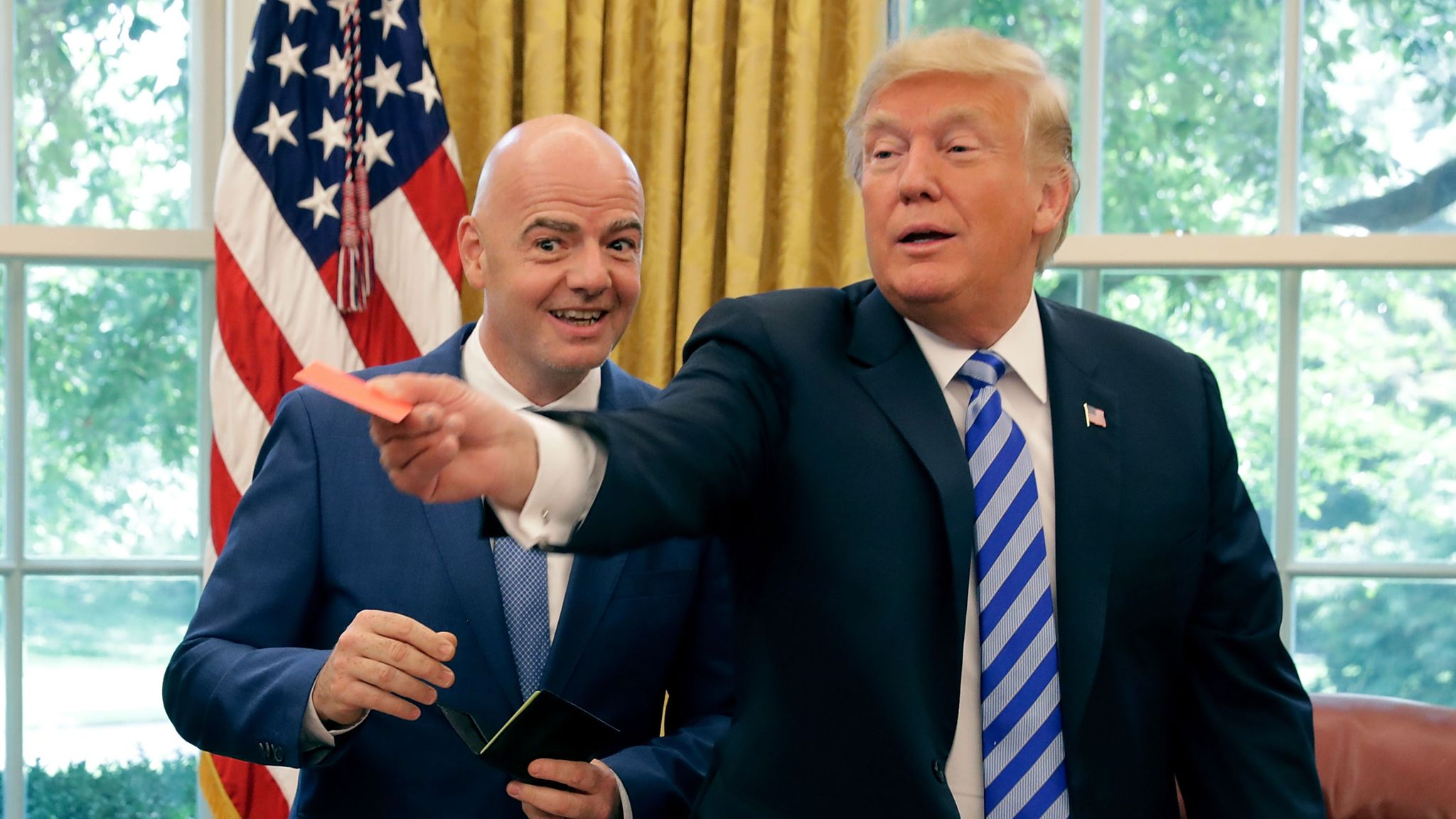 Infantino and Trump: Horsing around in the Oval office.

It therefore didn’t come as much of a surprise to hear from FIFA insiders that Infantino had reached out to US President Trump, seeking his political intervention at home, following the opening of formal criminal investigations against him and his bosom buddy at the office of Attorney-General (OAG) Michael Lauber.

We are reliably informed that Trump had successfully managed to stall the opening of a criminal probe into the affairs of the two, were it not for the growing number of complaints lodged at the Federal assembly.

And it had came to pass last May that Infantino became the subject of a criminal probe in his native Switzerland, after Basel based criminal law expert Markus Mohler formulated an urgent suspicion complaint for instigating abuse of office, breach of official secrecy and favoritism. On the basis of Mohler’s advice, criminal charges were filed via email at the Bern Cantonal Justice office.

In a classic example of the phrase “the arc of the moral universe is long, but it bends towards justice”… the Swiss OAG’s disciplinary committee this week appointed Stefan Keller as a special prosecutor to investigate Attorney General Michael Lauber over his alleged mishandling of the FIFA bribery probe.

In a rather ignominious milestone, Lauber last month became the first national official since modern Switzerland’s founding in 1848 to undergo an impeachment process relating to his handling of the soccer inquiry. 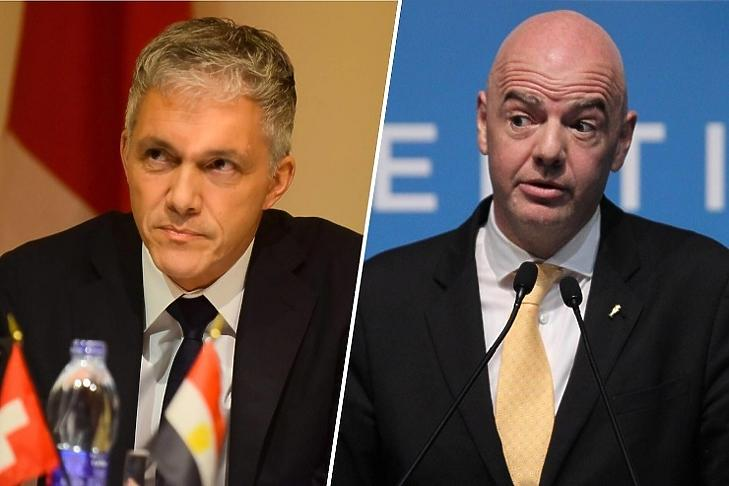 The watchdog overseeing Swiss federal prosecutors – AB BA – placed him under investigation last year after he held three closed-door meetings with FIFA President Infantino regarding the status of the corruption inquiry.

The AB-BA watchdog announced that Swiss lawmakers conducting the impeachment process against Lauber had asked it to review Infantino’s conduct too in the investigation after three criminal complaints were filed against both men and other unnamed persons with prosecutors in the capital Bern.

And so it doesn’t come as a surprise that immediately Infantino learnt of criminal complaints made against him last May, his first instinct was to contact US President Trump, seeking political intervention with the Swiss authorities who seem intent to seeing this probe through to conviction.

Why would a FIFA President’s first reaction to a criminal probe into his conduct be to call the “leader of the free World” and would any other President (like Obama) even have taken his call in this case?

Trump has variously been accused of interfering with the criminal justice system in the US, most notably by hiring William Barr as AG, a man who actually had to audition for this post by writing opinion pieces in major newspapers castigating the appointment of Special Counsel Robert Mueller to look into election interference by Russians, in aid of Trump’s victory.

What did Infantino expect Trump to do, considering that this is an independent process within the bulwark of an independent republic, that prides itself for that same independence?

In response to this turn of events, FIFA welcomed the appointment of Keller to look at the plausibility of criminality in these cases stating that Infantino had been the target of previous anonymous complaints which “have been dismissed as unfounded by the relevant authorities.”

This reasoning is both absurd and ridiculous even for those unschooled in the law.

In a nutshell, Swiss judicial investigators had discovered that both Lauber and Infantino had had at least 3 undocumented, secret meetings while he was handling a multitude of FIFA cases, a fact which eventually got Lauber sanctioned with an 8% deduction on his CHF 300,000 salary, which he has proceeded to appeal.

Elsewhere, Lauber somehow managed to sneak in a 4-year extension of his tenure as the AG in a tight Parliamentary vote late last year despite questions already existing about his complicity in shoddy dealings in football and elsewhere.

However, the most poignant and incontrovertible indictment of Lauber was the Swiss courts ruling that compelled him and two of his subordinates to recuse themselves from all football investigations and prosecutions following applications by accused persons and the presentation of cast-iron evidence of their involvement with Infantino.

Obviously questions abound about the impartiality of the Swiss Justice and Parliamentary system in matters of corruption, especially in the face of the renewal of the term of Lauber by Parliamentarians despite already existing complicity in other scandals.

According to Swiss Professor Mark Pieth, a criminologist at Basel University, Swiss Parliament is a conglomeration of amateurs, many of whom would be unable to properly wade through the weighty issues in the criminal claims made and the outcomes of supervisory bodies like the AB-BA. 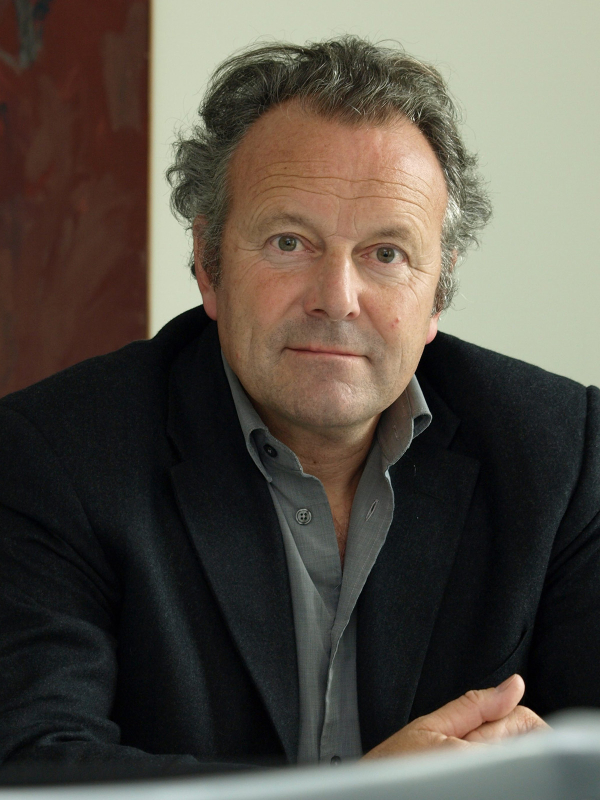 Pieth was the first to call out the 100 day tenure of Infantino as a disaster saying, “We have to stop the self-regulation of FIFA,” “they are clearly not able to regulate themselves. States need to intervene, not just Switzerland on its own, but perhaps states from within the OECD [Organisation for Economic Co-operation and Development] or the Council of Europe.”

So perceptive was Pieth that by June 2016 he had already forseen exactly where FIFA was headed and told the media thus;

FIFA Congress in Mexico had unanimously passed a resolution giving the new FIFA Council power to appoint or “dismiss any office holders” of its independent bodies such as the ethics committee and the audit and compliance committee.

It effectively gave the council, which had replaced the former executive committee and now headed by Infantino, the right to fire elected officials like ethics judge Hans-Joachim Eckert or ethics investigator Cornel Borbely.

Would you believe that within a year both Eckert and Borbely were shown the door in the most disgraceful of circumstances, where Infantino is not satisfied just sacking people, he prefers to piss in their mouths on their way out?

“People no long want to be controlled. For me this means a return to the Blatter Middle Ages,” said Pieth.

“I don’t think FIFA is in a very good state. Their actions are very amateur. They should be calmer and start to reform instead of saying ‘everything is fine, everything is reformed now that I’m here’.

The latter part of the quote showing the God-complex within Infantino.

Because football is such a critical cog in World affairs, the Swiss cannot screw up where FIFA is concerned, for if they do, any remaining belief and trust in its institutions will be trashed forever.

Switzerland is a country, more than any on earth, which was been founded on the principle of TRUST which later translated in the country hosting some of the most trusted organisations in the World including banks and NGOs.

FIFA under Infantino is now in the process of jeopardizing this hard-won reputation with its slew of anti-trust actions over the last 4 years.

The attempt by Infantino to rope in Donald Trump into this mix puts the Swiss Government in a real conundrum, are they really an independent state or a marionette in the hands of puppeteer?

Stefan Keller doesn’t know it yet, he has walked into an elaborate wolf’s lair (excuse the pun) where his actions will have reverberations the World over, for good or for evil.

Never have so many good peoples prayers been vested in a single individual like those directed at Keller.

FIFA insiders are already boasting confidence, claiming that their boss Gianni Infantino has the entire Swiss Machinery in his pocket, and can literally get away with anything as he has for the better part of his career. They claim that its only a matter of time before Steffan Keller is compromised by Infantino, just like Swiss Prosecutor Michael Lauber was easily enticed and coerced into halting FIFA investigations, or the Court of Arbitration for Sports (CAS) Director General Matthieu Reeb is in his pocket.

And there is every reason to believe them.

TIME HAS COME TO START THINKING OF A WORLD WITHOUT FIFA