written by onyii January 6, 2020
This article is also available in the following languages:
FacebookTwitterInstagramTelegramEmail 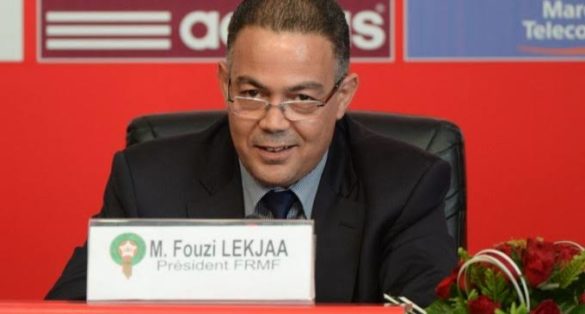 The rumor mill is abuzz with information that Morocco FA President and CAF 2nd Vice-President Fouzi Lekjaa is preparing to throw his hat in the ring for the CAF Presidency during the 2021 elective congress. 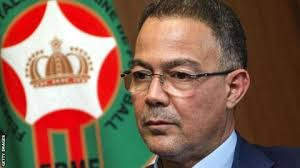 If this rumor be true, it establishes the authenticity of the long-held belief that the position of current CAF President Ahmad Ahmad is no longer tenable and that he would likely not be on the ballot seeking a second term.

Ahmad, a native of the island nation of Madagascar lowered the leadership and intellectual bar of CAF leadership to an unprecedented low level within 2 years of assuming the position. 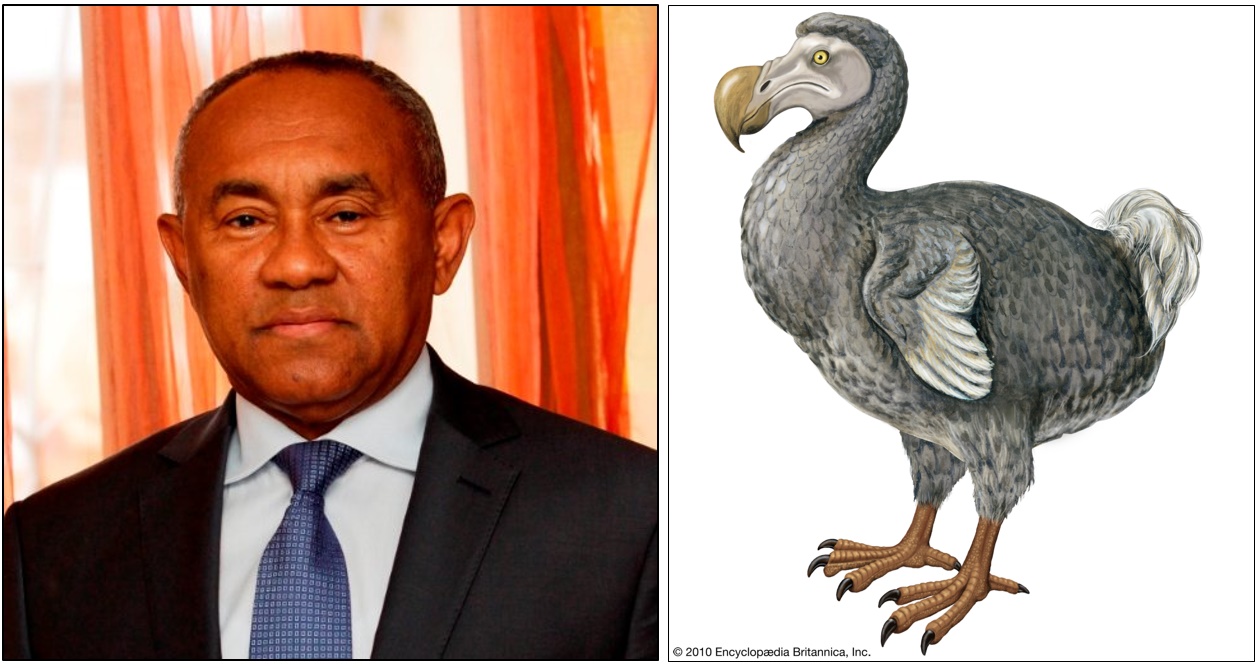 CAF President Ahmad Ahmad, from the land of the extinct Dodo.

The highlights of this shambolic leadership were his arrest on 5th June 2019 in Paris and continuing investigation by the French anti money-laundering and corruption police, the filing of a dossier with the FIFA Ethics committee by former employees of CAF and the tumultuous handing over of the management of CAF to elements of FIFA.

Ironically, Fouzi Lekjaa has been the smoking gun in Ahmad’s hand as he went about the sordid business of destroying CAF.

In 2017, shortly after his election to the CAF Presidency, Ahmad created the position of CAF 3rd Vice-President, despite this position being absent from the CAF statutes, and gifting it to Fouzi Lekjaa.

Fouzi Lekjaa was also gifted the position of Chairman of the very powerful CAF Finance committee from which he was expected to oversee the financial viability and prudent management of CAF and its resources.

It speaks to his incompetence or dereliction of duty that today CAF has studiously refused to present proper books of accounts to the CAF General Assembly for the last two years, in accordance with CAF statutes but rather gave a PowerPoint presentation whose conclusion was that CAF was in the financial red.

Why else would the CAF Executive committee (Exco) insist that a firm of independent auditors be engaged for purposes of a forensic audit in early 2019 if indeed everything was fine with management of CAF finances?

Fouzi Lekjaa seemed only intent in consolidating his power in CAF as evidenced by stuffing of his Moroccan stalwarts in majority of the CAF standing committees and the hiring of a Moroccan dentist (Mouad Hajji) to the post of CAF General Secretary.

It was this dominance of the CAF sanding committees that allowed Lekjaa to go scot-free after assaulting Ethiopian referee Bamlak Tessema Weyesa during the Confederations Cup final where Moroccan club RS Berkane lost the final on penalties to Zamalek of Egypt. The disciplinary committee found insufficient evidence of the assault despite it being captured on Television. 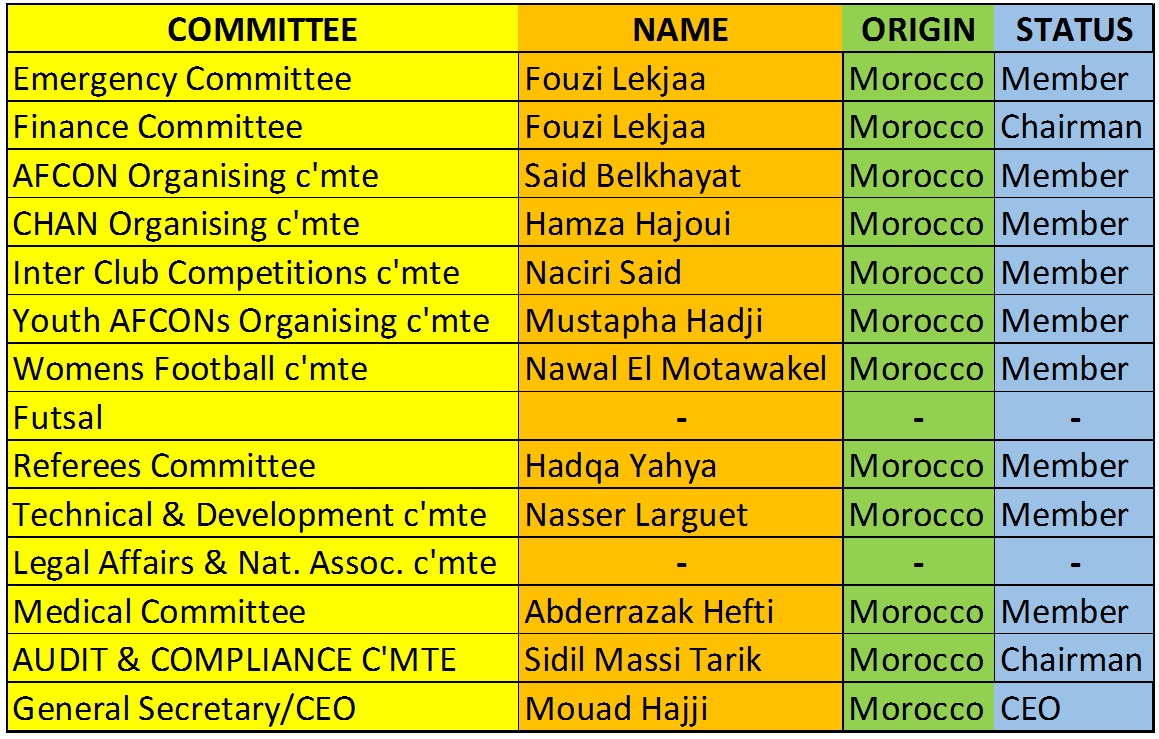 However, it is the looting of the CAF coffers with his complicity that defies even the most pragmatic minds as to his competence for this very crucial committee which was previously held and managed competently by Seychellois Suketu Patel.

Worse, Lekjaa set up the system within CAF in such a way that there is a Moroccan GS, Moroccan Finance Committee Chairman and a Moroccan audit and compliance committee Chairman who all owe fealty to this same Lekjaa and are likely to allow the egregious looting of CAF finances without question.

How can a Moroccan, who has been handpicked by Lekjaa for the Chairmanship of the audit and compliance committee, oversight his appointing authourity?

Ahmad on the other hand, quite bizarrely announced to the World that by virtue of being the President of CAF, he automatically became the Chairman of all CAF committees and in the process, gave cover to the other committee chairmen to work under his express auspices.

So it will be impossible now to hold committee Chairmen accountable for their acts of commission or omission because they will lay the blame squarely on the shoulders of their bungling CAF President.

Majority will now point fingers at Ahmad and blame him for usurping their roles and use him as the scapegoat.

Liberian Musa Hassan Bility, in an act of supreme independence, resigned from being a member of CAF’s Emergency Committee and as president of the African Nations Championship (CHAN) Standing Committee. 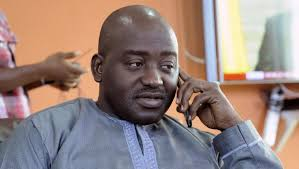 Bility cited gross interference in his roles and the usurping of his powers by the CAF President and Fouzi Lekjaa.

Fouzi Lekjaa came from obscurity when he used Morocco’s bid to host the World Cup 2026 to propel himself by using the resources made available to him by his country to endear himself to African voters.

It was rumored that Morocco had entered into strategic partnerships with at least 30 out of the 54 African countries in return for the World Cup vote and these partnerships would come in the form of massive investments in legacy infrastructure programs and outright cash bribes to FA Presidents.

The vote from Africa however, shows that 11 out of 52 voting countries opted not to vote for Morocco at the FIFA Congress held in Moscow, on the sidelines of the 2018 FIFA World Cup in Russia.

You will note that 6 out of the 11 countries that voted for the United 2026 bid (USA, Canada & Mexico) were from the independent-minded COSAFA zonal Union of CAF.

Lekjaa took it as an affront for any African country not to vote for Morocco and this has led to his continued animosity with these countries.

It would be foolhardy to underestimate the role of Lekjaa in the absolute domination of Ahmad on all spheres of CAF politics, beginning with the weaponization of Islam in the organization by the creation of the “Muslim brotherhood” – a grouping of the African FA Presidents who profess the Islamic faith and who are treated like the members of a higher caste in African football.

We saw this clearly in 2018 when CAF spent an inordinate amount of money to facilitate these members of the “CAF Muslim brotherhood” on an all-expense paid pilgrimage (Umrah) to Saudi Arabia. 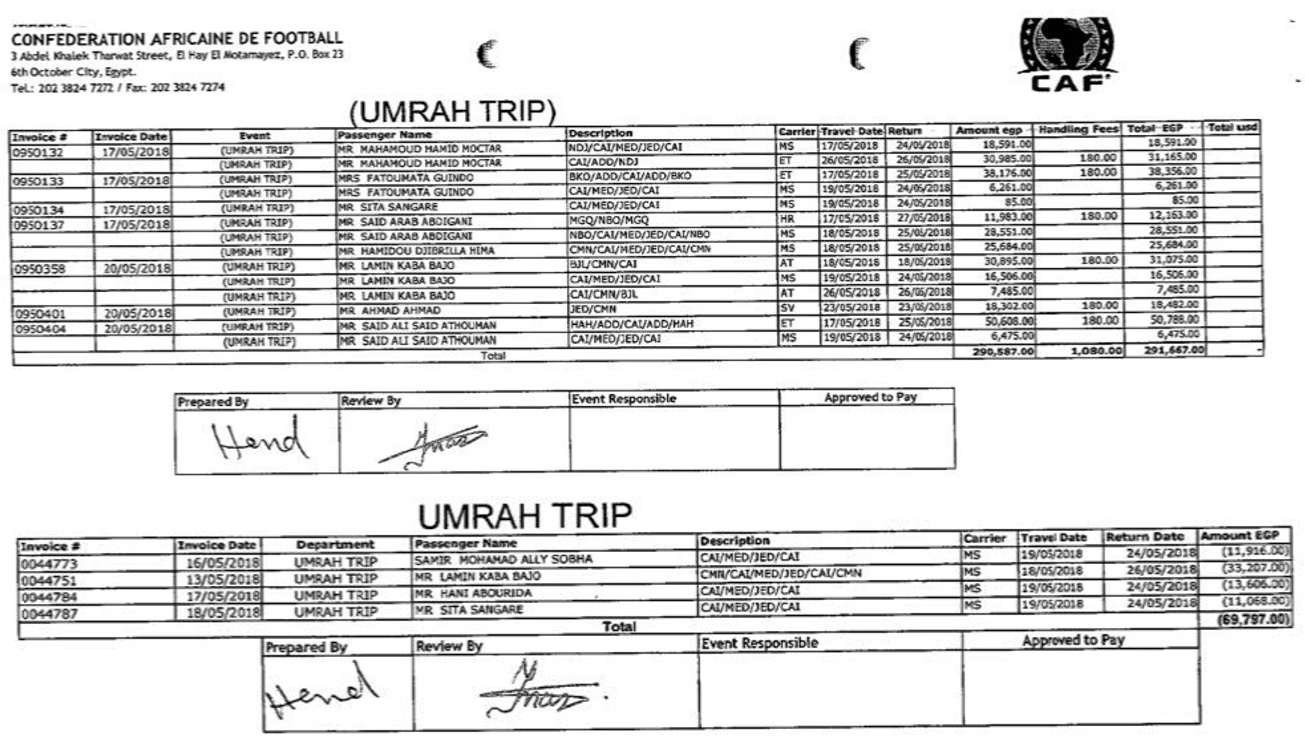 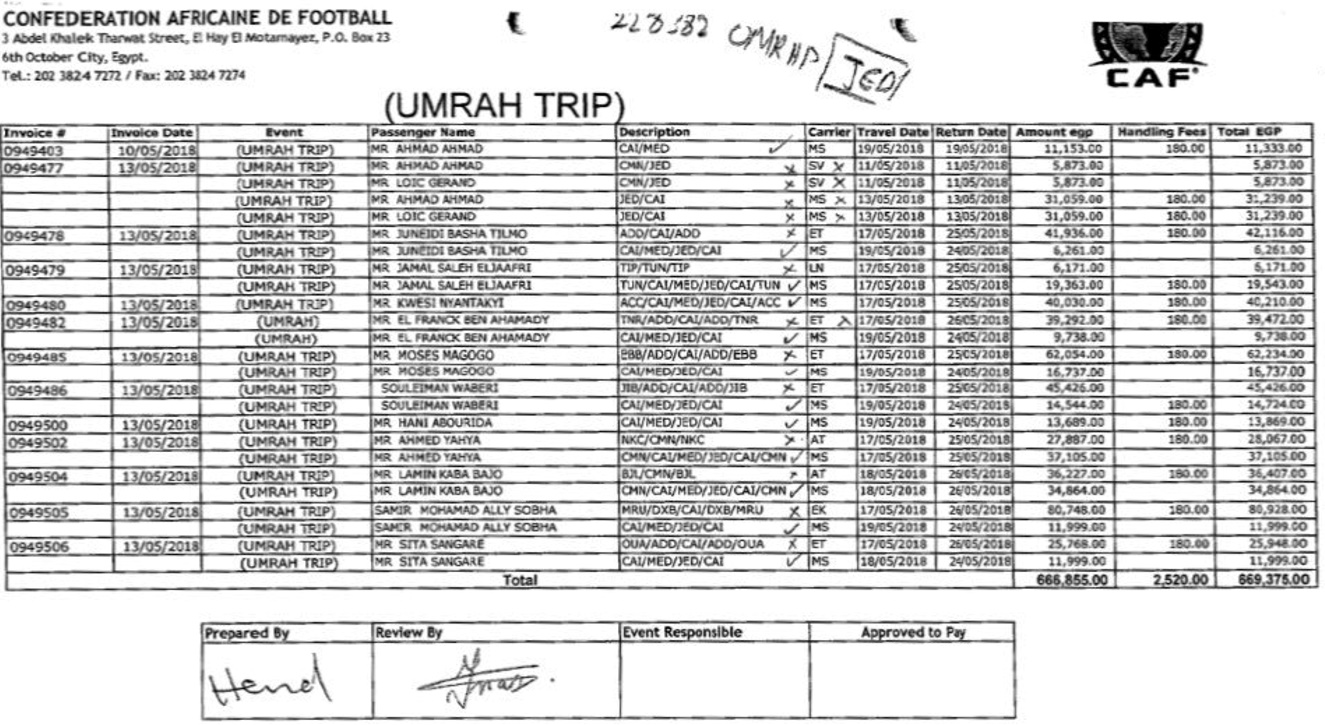 Any FA President who falls outside this brotherhood and who shows an independent streak, will quickly be neutered. Case in point, CAF spent an inordinate amount of money to ensure that Zimbabwe did not re-elect Dr. Philip Chinyangwa while also ruthlessly sending a message to Dr. Danny Jordaan of South Africa that they control all the votes in Africa by supplanting his ambitions with a minnow instead, Malawian Walter Nyamilandu, to the high office of FIFA Council in 2018.

Dr. Jordaan has since capitulated shamelessly and been given the token office of CAF 3rd Vice-President which had been vacated by Lekjaa when he ascended to the one of CAF 2nd Vice-President.

The independent Liberian former FA President and CAF Exco member Musa Hassan Bility was instead given a dubious 10-year FIFA ban, at the behest of Ahmad, for his opposition to the hostile takeover of CAF by FIFA in mid-2019.

So why does Fouzi Lekjaa assume that he has the qualifications to become CAF President in such a critical period of African football history?

Well, for the longest time he has been in the good graces of the Monarch of his country Morocco, King Mohammed VI who has allowed him unfettered access to the funds needed for such hare-brained schemes like the hosting of the FIFA World Cup. 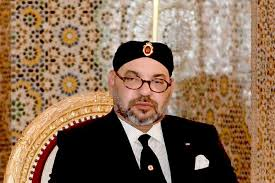 Lekjaa was rumored to have been on the Kings radar for appointment as the Minister for finance in the Country, though in hindsight this would have been a bit of stretch anyway.

The country spent millions of dollars in this ill-advised venture (FIFA World Cup 2026) the bulk of which was paid to foreign firms and bribes to African FA Presidents.

Nothing better describes the sentiments of Moroccans towards King Mohammed VI and Fouzi Lekjaa than the songs sung by Moroccan Ultras (radical football fans) in their stadiums, where truth and satire blend in an exhilarating output of pulsating and passionate flow of sentiment.

In this country we live in darkness, we ask for salvation

Give us victory our lord

They spent on us drugs from Ketama, they left us like orphans

They will be accountable on judgement day

You wasted our talents, destroyed it with drugs

How do you expect it to show?

You squandered the country’s wealth, gave it to foreigners

Ohhhhh, you killed our passion, Ohhh, you started the provocations…

This sung by the Ultras from the giant club Raja Casablanca gives an inkling to their state of mind and their true sentiment about the leadership of their country and their football.

The Ultras make reference to the easy access to the hashish drug that is grown in the region of Ketama. Morocco is the world’s largest exporter of the sticky cannabis resin.

The so-called recreational use of the rug among locals has also remained at an all-time high, with many young men and boys drawn into the trade and consumption of hashish from very early in their lives, much to the detriment of football prospects. 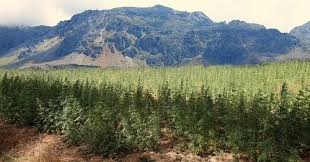 Kind Mohammed VI allowed also the expenditure of millions of dollars to foreigners in the hope that the World Cup would come to Morocco while football continues to suffer in the country.

The words of the Ultras are haunting to say the least, they show a remarkable clarity of thought and placement of blame where it most likely belongs.

Which continues to beg the question, with the gargantuan failure of Fouzi Lekjaa to bring the World Cup to Morocco, or in his role as a member of the CAF Exco and Chairman of CAF Finance committee, why would anyone believe that Lekjaa has the capacity to even steer CAF in any right direction?

In the same field, Lekjaa would be up against FIFA favourite Augustin Senghor from Somalia and Ahmad protégé Mauritanian Ahmed Yahya.

Would any of these people be able to control CAF when such a strong and vindictive personality like Lekjaa also sits on the Exco and has his hands on all the levers of the organization?

It is doubtful that there can be peace in CAF as long as Lekjaa remains in a lower position than CAF President and the only way out of this conundrum would be his eventual removal from the CAF Exco as well in 2021.

This article is also available in the following languages:
FacebookTwitterInstagramTelegramEmail
2 comments 7 FacebookTwitterPinterestEmail

THE SCOURGE OF THE CAF “MEDIA EXPERTS”

Onyii, it seems English is not your first language!