written by admin September 19, 2019
This article is also available in the following languages:
FacebookTwitterInstagramTelegramEmail 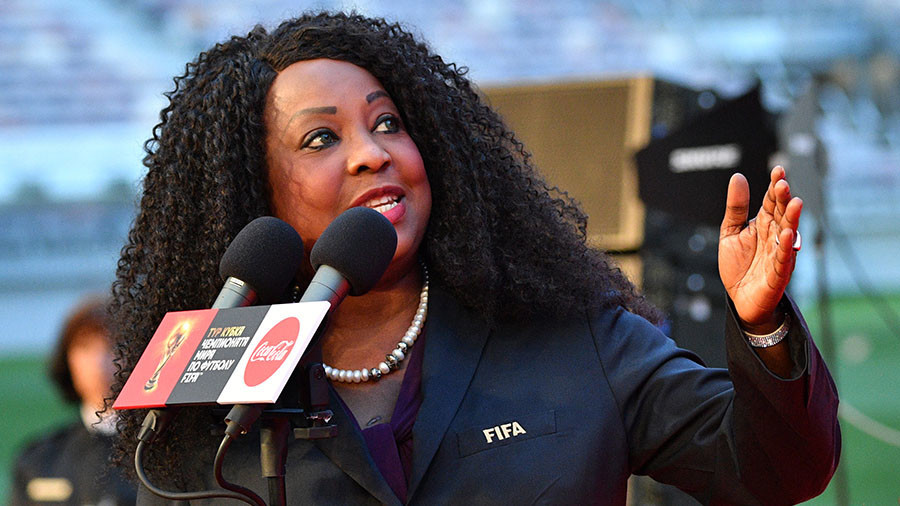 FIFA Secretary General Fatma Samoura has found herself on the receiving end after it emerged that she is top on the list of suspects set to be questioned over her links to disgraced Confederation of African Football (CAF) President Ahmad Ahmad. Fatma and Ahmad have had a close relationship since 2010 when she was appointed as the UNDP representative to Madagascar his home country.

Sources within the Office Central de Lutte Contre la Corruption et les Infractions Financieres et Fiscales (OCLCIFF) which is a department under the French Home Office say that Ahmad’s file is almost complete, upgrading him from a person of interest to a full fledged suspect.

Fatma will not be questioned as a person of interest but as a likely suspect and co-conspirator to the crimes committed by Ahmad, concerning the use of French phantom companies to launder money.

The two companies in question are Tactical Steel and ES Pro Consulting, both registered in the Toulon region of France and which were licensed as equipment suppliers by FIFA in record speed. They were single-sourced by CAF to provide equipments and kits at costs 200% above the market value.

Despite the firms being registered in France, the money was wired to secret bank accounts in Ankara, Turkey and Dubai in the UAE.

FIFA officials Matthias Graftsrom and Veron Mosengo-Omba who have been actively working to secure Ahmad’s continued stay in office through intimidation and coercion will also be interviewed but only as persons of interest. Failure to attend the summonses may lead to warrants of arrest being issued against the two.

Asked whether Gianni Infantino is on the list of suspects set to be investigated over crimes involving the African Confederation, our source was non-committal, saying that he may not be a suspect for the time being.

Gianni Infantino has been dangling the carrot to French President Emmanuel Macron, claiming to want to move FIFA headquarters from Zurich to Paris, something which seemed to entice the French Government which has long held the believe that the nation is the home of world football. The carrot from Gianni has a two-pronged purpose. For one it is being used as blackmail to ensure he wards off any encroachment from Swiss Authorities. Secondly, it baits the French authorities to selectively pursue cases of interest to him. 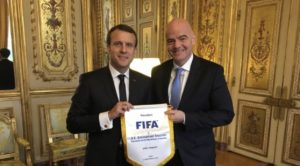 DUPED: French President Emmanuel Macron has been duped by Gianni Infantino that FIFA’s headquarters will be relocated from Zurich to Paris, and in exchange Macron has rubber-stamped for his fellow frenchman to be hounded by French Police in a bid to keep him away from the FIFA Presidency.

Which was why former UEFA President Michel Platini was suspiciously arrested 4-days after holding a press interview and confirming that he will be actively rejoining football politics after his ban expires next month. It is suspected that Gianni Infantino had a hand in that arrest.

Ironically while the Swiss Government machinery rallied around their citizen Gianni Infantino to facilitate his ascension to head FIFA, the French Government is undermining their own citizen and playing into the hands of the “enemy” by pursuing Platini instead of Gianni Infantino and his off-shoots.

It will be remembered that Swiss Prosecutor Michael Lauber conspired with Gianni Infantino to fix former FIFA President Sepp Blatter and Michel Platini, by lumping them with fictitious charges, which have since been dropped when Infantino achieved his objective.

It would be poetic justice for the French football legend if the French investigators arrest the same culprits who precipitated his ban from all footballing activities. It is rather common sense that theres no better person to secure French interests in the world of football, than a French citizen. It would be folly of Macron to place the hopes of his country on a Swiss citizen.

FIFA is an institution whose officials are predisposed to the crimes which France have designated as criminal, unlike Switzerland which has a history of embracing war criminals and all sorts of vagabonds from around the world as a safe haven to bank their proceeds of crime.

A Case Of Legends And FIFA’s Double Standards: Kalusha Bwalya vs Michel Platini