SAUDI DOLLARS! Gianni Infantino Behind Move To Relocate CAF From Egypt To Morocco

written by admin August 19, 2019
This article is also available in the following languages:
FacebookTwitterInstagramTelegramEmail 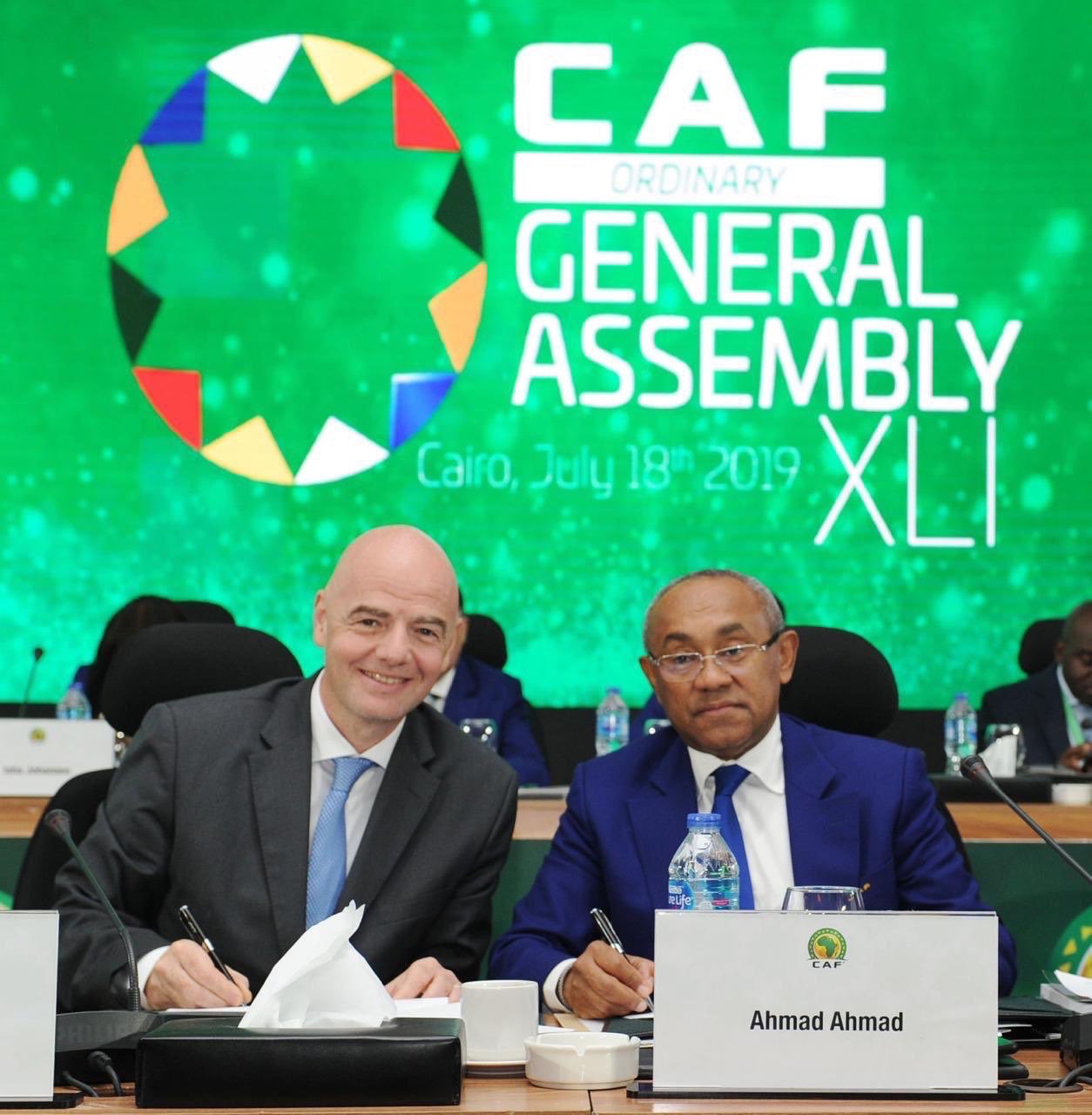 During the Africa Cup of Nations 2019 held in Egypt, word surfaced that the Confederation of African Football (CAF) intended to renegotiate its hosting agreement, to include among other things, diplomatic immunity for senior CAF officials including embattled FIFA Vice President Ahmad Ahmad, who had been apprehended in the same month of June in Paris by the police for questioning over financial malpractices involving a phantom company Tactical Steel which has links to him.

The ensuring public relations debacle led to the “intervention” of FIFA, by seconding Fatma Samoura to CAF.

As per the joint document released on FIFA’s official website, Fatma’s mandate did not include the forceful acquisition of rights from CAF, but was more focussed on governance and policy structural reforms. 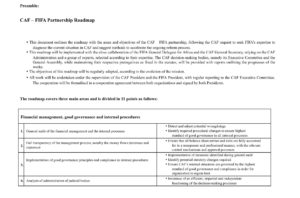 Joint document from both CAF and FIFA showing areas which needed intervention. instead, Gianni Infantino’s only objective was to forcefully acquire commercial and broadcast rights of African FA’s on behalf of the Saudi’s.

Ahmad has been adamant that the hosting agreement must be reviewed, failure to which CAF will be forced to relocate to another country. He was literally blackmailing Egyptian authorities to either comply or face the prospect of relocation of the asset that they have helped nurture as founding members of CAF. 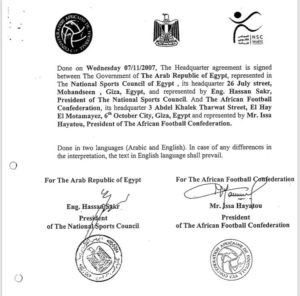 Hosting agreement between CAF and the Egyptian Government signed in 2007 and expired in 2017. Reports of this were only made available this year, seeing as it was Gianni’s best chance of relocating CAF from Egypt.

And while Ahmad became the face of the subtle threat to relocate CAF, exclusive reports indicate that the threat came directly and expressly from FIFA President Gianni Infantino, who has deep interests in African Football rights.

The “threat” was relayed personally to Egyptian Sports Minister Ashraf Sobha by Director of Member Associations and Development and Gianni Infantino’s right hand man Veron Mosengo Omba, a Congolese native who went to school with Infantino. He paid a “courtesy call” on the Minister ostensibly to congratulate him for hosting a spectacular tournament, but the real agenda was the hosting agreement, publicly touted by CAF President Ahmad Ahmad in the run-up to the tournament. 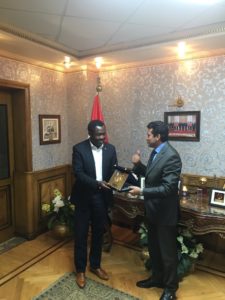 Exactly one week after that meeting, FIFA General Secretary Fatma Samoura, sent a letter to all CAF FA’s, demanding that they irrevocably concede their commercial and broadcast rights for the FIFA WorldCup Qualifiers 2022 and 2026.

A legal advisory from Gianni Infantino’s personal lawyer and CAS arbitrator Michele Bernasconi may have triggered this desire to move headquarters from Egypt. 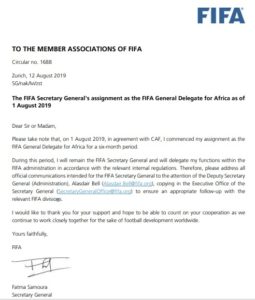 A letter from Fatma Samoura technically “resigning” her official function at FIFA in-order to handle her new role at CAF. Just a day later, she was demanding African FA’s to irrevocably concede their commercial and broadcast rights to FIFA.

In 2016 following complaints from Egyptian marketing agency Presentation Sports, the Egyptian Competitions Authority (ECA) launched two parallel probes on both Confederation of African Football (CAF) and FIFA as regards to their commercial obligations and dealings when it comes to broadcast rights. The ECA was acting in the interests of Egyptians and member nations of CAF, according to the ruling released in June 2019.

In the case of CAF, ECA found that the absence of a tendering system where Largadere was granted a 20-year monopoly led to a significant harm on competition. They raised issue with CAF’s outright refusal to consider offers from other entities, thereby denying it increased revenue from a transparent price discovery mechanism. The ECA also sides with ordinary subscribers/consumers in finding fault in CAF selling all its rights in one single package and specifically raised the following issues.

For these reasons, ECA came to a number of conclusions, all under the umbrella that CAF abused its dominant position and carried out anti-competitive licensing by granting Lagardere all exclusive rights to media and marketing of the main African championships for a long period of time and with unfair processes, infringing Article 8 of ECL. ECA used its prerogatives available under Article 20 of ECL, which allows the ECA Board to issue a decision to address a suspected breach of ECL. The measures imposed on the CAF included the following:

 An obligation on the CAF to follow free open, fair and transparent tendering procedures for the award of broadcasting rights.

 An obligation on the CAF to assess the offers made by different bidders according to objective pre-set criteria;

 An obligation on the CAF to offer its broadcasting rights in several smaller (reasonable and meaningful) packages on a market-by-market base, particularly separating the sale of live TV broadcasting rights from Internet live streaming and other internet rights;

Over and above these recommendations and legally binding ruling by the ECA, the Egyptian First Court of Instance upheld these findings and imposed a total fine of 1 Billion Egyptian Pounds which is an equivalent of US$ 60 Million on CAF administrators.

In light of the above, Gianni Infantino’s legal counsel Michele Bernasconi who is preparing the draft agreement and managing the TV Rights acquisition by Softbank on behalf of the Saudi Sovereign Wealth Fund, has informed his principal that there exists a conflict considering the ECA ruling.

Michele Bernasconi has been cited in a previous article as being Infantino’s hatchet man at the Court of Arbitration for Sports (CAS) where he’s an abitrator, and shares close ties CAS Secretary General Matthieu Reeb. 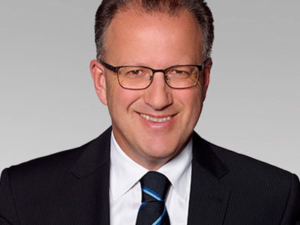 Lawyer Michele Bernasconi who is the brains behind the acquisition of rights by Saudi funded outfit Softbank.

To try and tactfully acquire these rights, they have smartly used the FIFA letterhead signed by Fatma Samoura as Secretary General, despite her delegating that specific role to her assistant a day earlier. According to Mr. Bernasconi, this technicality can be used to evade sanction by ECA if and should a complaint be filed in future dates. The letterhead strategically bears the physical address of FIFA in Zurich, yet her mandate at CAF commenced on August 1st. 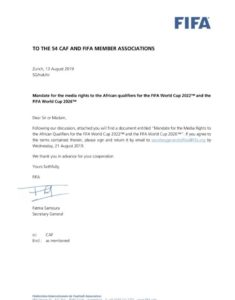 The letter from Fatma Samoura, written on FIFA letterhead in a bid to circumvent Egyptian Competition Authority laws which barred CAF from such monopolistic and fraudulent acquisitions.

In the worst case scenario, Gianni Infantino was banking on relocating CAF to Morocco as the country has non-existent public interest laws, being a monarchy with one absolute leader. However the close ties between Egyptian President Fattah Al Sisi and nearly all movers and shakers in the geo-political realm has forced him to ease pressure on Ahmad regarding that proposal.

This article is also available in the following languages:
FacebookTwitterInstagramTelegramEmail
3 comments 0 FacebookTwitterPinterestEmail

DEAD ON ARRIVAL: Read How Musa Bility’s Case At CAS Is Doomed To Fail Through Bribery By Gianni Infantino

RAPE ALLEGATIONS AGAINST DANNY JORDAAN AND HIS ATTEMPT...

OH DANNY JORDAAN, YOU JUST HAD TO GO...