Top Posts
DID AMB. (DR) AMINA MOHAMMED GIVE WHISKY TO A RECOVERING ALCOHOLIC?
ISHA JOHANNSEN – A VIRUS THAT HAS NOW INFECTED THE FIFA COUNCIL
TIS THE SEASON: CAF ELECTIONS – LIFE AND DEATH BATTLES
WHO WILL MOVE THE VOTE OF CONFIDENCE IN INFANTINO AT THE SEPTEMBER 18TH FIFA CONGRESS?
BILITY’S PROPHECY: INFANTINO HAD NO INTENTION OF RESIGNING AFTER CRIMINAL INDICTMENT
BRING IT ON! INFANTINO DARES SPECIAL PROSECUTOR STEFAN KELLER TO ARREST HIM
SWISS JUSTICE WILL CRACK DOWN VICIOUSLY ON FIFA IF INFANTINO REFUSES TO RESIGN
CAF ELECTIONS 2021: A BURIAL CEREMONY OR WITNESS TO A RESURRECTION
BANANA REPUBLIC: SWISS CORRUPTION FIGHTING BACK WITH LEGAL TECHNICALITIES
EMILIO GARCIA SILVERO: MEET THE MAN SET TO DELIVER BRIBES TO SPECIAL PROSECUTOR STEFAN KELLER
Home News Why CAF Secretary General Mouad Hajji Resigned In A Huff
News

Why CAF Secretary General Mouad Hajji Resigned In A Huff

written by admin March 3, 2020
This article is also available in the following languages:
FacebookTwitterInstagramTelegramEmail

The African football family has been in shock today, following the abrupt resignation of hitherto untouchable CAF Secretary General Mouad Hajji. Even more confused were members of the CAF Executive Committee, most of whom were caught unawares by this development.

The news first started filtering through Moroccan news wires that Mouad Hajji has resigned late afternoon yesterday at around 3pm GMT, that Hajji has called it quits, barely 10 months into office. He was brought on board by Morocco FA (FRMF) President Fouzi Lekjaa to replace the late Amr Fahmy, who had been sacked by President Ahmad Ahmad, after Fatma Samoura leaked details of his dossier detailing financial and ethical malpractices in the organisation.

In his resignation, Mouad Hajji has requested to be allowed to immediately leave for the (Kingdom of) Morocco, with speculation hinting to a broader involvement of Moroccan authorities in influencing his decision.

This follows the February 9th exclusive report on this website, linking FRMF President Fouzi Lekjaa to corruption and embezzlement of funds, to the tune of $24 million, as captured in a FIFA commissioned audit, conducted by PWC.

But it is the resignation of Mouad Hajji which has sent the clearest signal yet, that CAF President Ahmad Ahmad together with his inner circle consisting of his Vice Presidents Constant Omari, Fouzi Lekjaa and Hany Abourida, are counting their last days in football.

During the six-month stint of Fatma Samoura at CAF, Mouad had built a very close rapport with her, to the extent that he was bouncing off  crucial decisions through her and not Ahmad as would have been expected. The statement released by FIFA upon expiry of Fatma’s mandate, was telling in that it didn’t mention Ahmad but Hajji as the lead point man of FIFA, during the caretaker period.

So what exactly transpired?

Well sources in Cairo have reliably informed us that FIFA dispatched a follow up mission of PWC to CAF, for the purposes of tying up all the loose ends, following the immense media pressure elicited by the leaking of the report. The PWC mission arrived in Cairo on Thursday and embarked on completing their assignment.

Mouad Hajji then telephoned President Ahmad Ahmad to inform him of their presence and requests for formal statements to qualify the audit, where Ahmad bluntly ordered Hajji to sign and “take responsibility” being that he is the chief accounting officer at CAF.

Hajji is said to have made some calls to Zurich and Morocco, seeking further clarification on the next course of action, and it was when he saw it fit to resign. According to the same sources, Hajji responded to calls from staff who texted him on his whereabouts with “Je suis malade” (or I am sick). 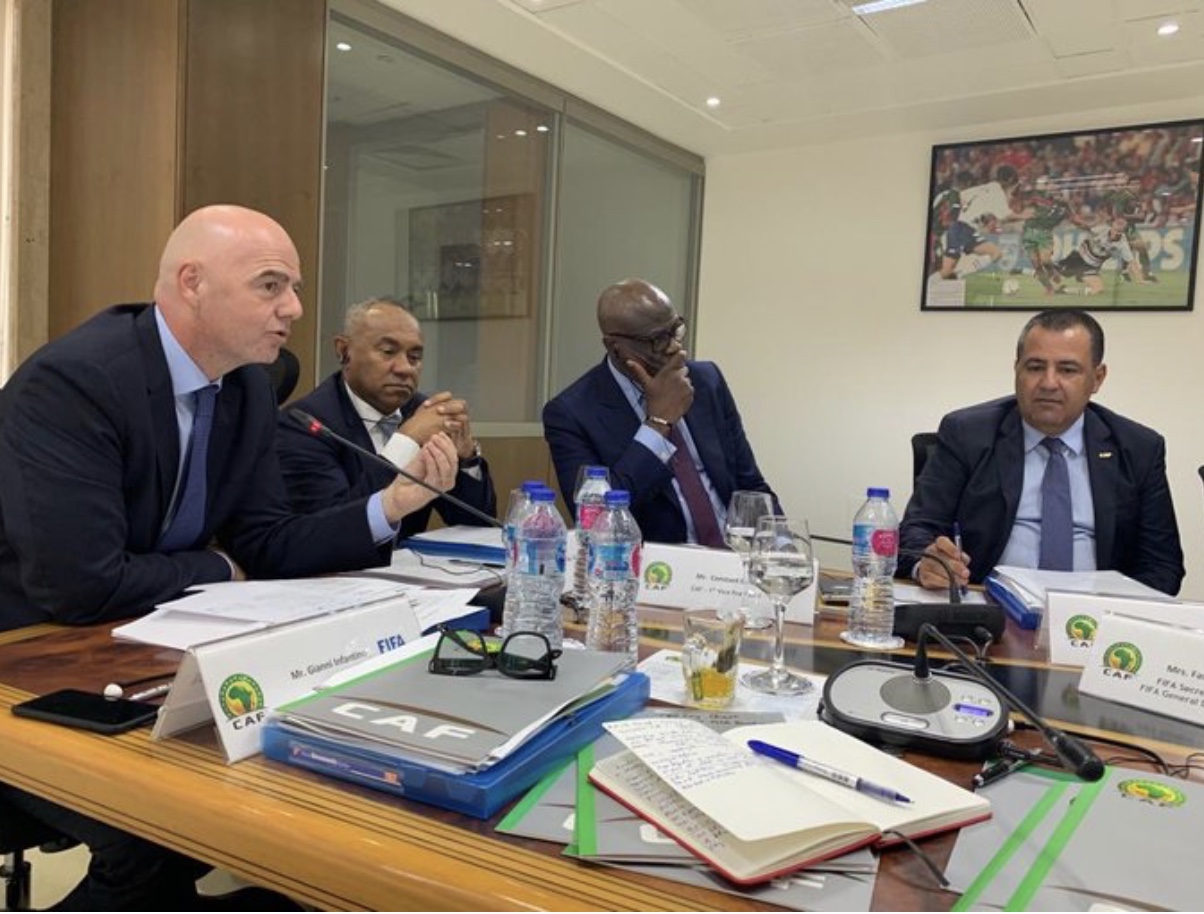 CAF President Ahmad Ahmad who was not in Cairo at the time, responded through his official Twitter account, with a hurriedly drafted press release only available in French, confirming that he had accepted Hajji’s resignation.

This comes in the wake of two other high profile resignations of Marketing Director Abdel Bah and Director of Legal Affairs Achta Sale, both tendering their resignations on February 13th last month.

FIFA President Gianni Infantino has come under intense scrutiny following allegations of protecting Ahmad Ahmad’s continued stay in office, by meddling with the Ethics Committee’s investigations of CAF cases, so as to use Africa for his own political expediency.

Gianni Infantino has continued with open confrontation against other confederations like UEFA and Conmebol, both who are actively building consensus for a no-confidence vote against him for meddling in their affairs and undermining their existing competitions. Undertones of this vote led to the cancellation of the FIFA Council meeting slated for Asuncion, Paraguay, with Infantino instead settling for video conference deliberations.

As it stands, CAF is an institution held hostage by four (4) men, leading to a simmering row with officiating staff and media experts who have not been paid their dues since last year.

All eyes are on FIFA, to keep good their word and ban the individuals cited in the PWC audit report, failure to which it will be clear to Africa and the rest of the world, that Gianni Infantino is protecting and entrenching corruption in Africa for his own personal gain.

FA Presidents from the African continent have started distancing themselves from CAF President Ahmad Ahmad and his close allies, fearing that they might also be casualties in this protracted crisis.

[…] FIFA Colonialism reported that FIFA dispatched a follow up mission of PWC to CAF to tie up loose ends following their leaked audit of CAF, which highlighted rampant corruption, including FRMF President Fouzi Lekjaa embezzling $24 million. […]