Top Posts
TIS THE SEASON: CAF ELECTIONS – LIFE AND DEATH BATTLES
WHO WILL MOVE THE VOTE OF CONFIDENCE IN INFANTINO AT THE SEPTEMBER 18TH FIFA CONGRESS?
BILITY’S PROPHECY: INFANTINO HAD NO INTENTION OF RESIGNING AFTER CRIMINAL INDICTMENT
BRING IT ON! INFANTINO DARES SPECIAL PROSECUTOR STEFAN KELLER TO ARREST HIM
SWISS JUSTICE WILL CRACK DOWN VICIOUSLY ON FIFA IF INFANTINO REFUSES TO RESIGN
CAF ELECTIONS 2021: A BURIAL CEREMONY OR WITNESS TO A RESURRECTION
BANANA REPUBLIC: SWISS CORRUPTION FIGHTING BACK WITH LEGAL TECHNICALITIES
EMILIO GARCIA SILVERO: MEET THE MAN SET TO DELIVER BRIBES TO SPECIAL PROSECUTOR STEFAN KELLER
BANANA REPUBLIC: SWITZERLAND TRIES TO REDEEM ITS ROTTEN REPUTATION AND LEGACY OF CORRUPTION
TIME HAS COME TO START THINKING OF A WORLD WITHOUT FIFA
Home Featured MONEY LAUNDERING ALERT! UEFA BOSS QUESTIONS GIANNI INFANTINO’S MOTIVE WITH $2.5 BILLION FUND
Featured

written by admin April 5, 2020
This article is also available in the following languages:
FacebookTwitterInstagramTelegramEmail

FIFA President Gianni Infantino has been on a wanton money spending spree since the Corona Virus epidemic took over the world, releasing money unaccounted for by the FIFA bureau, at a rate which is worrying heads of Confederations with the exception of CAF President Ahmad Ahmad and CONCACAF President Victor Montagliani. Both of them have been cited as chronic sycophants of the FIFA boss, who have gained financially and politically from his incompetence and malfeasance.

Indeed, the corrupt CAF and CONCACAF Presidents stand to gain the most, as they coincidentally head FA’s from some of the most back-water regions of the world, justifying increased emergency assistance from FIFA’s reserves.

Gianni first contributed $10 million to the World Health Organisation (WHO) at the insistence of Fatma Samoura herself a former UN employee, who has imported the hard-wired NGO mindset of wasting money on unnecessary undertakings. He then announced an emergency fund to cushion football entities from the adverse effects of the halting of football activity, without any form of consultation or approvals from statutory bodies.

The simplistic proposal at the table of Gianni Infantino is that the money will be disbursed through Football Associations, where CAF and CONCACAF remain hubs of corruption and money laundering.

It has since been established that Gianni Infantino was channeling money to CAF, money. which was then re-routed to him which he used to bribe Swiss Attorney General Michael Lauber, in a bid to manipulate cases against football individuals he intended to settle scores with. Lauber was working in concert with Valais Prosecutor Rinaldo Arnold, who is a childhood friend of Infantino. 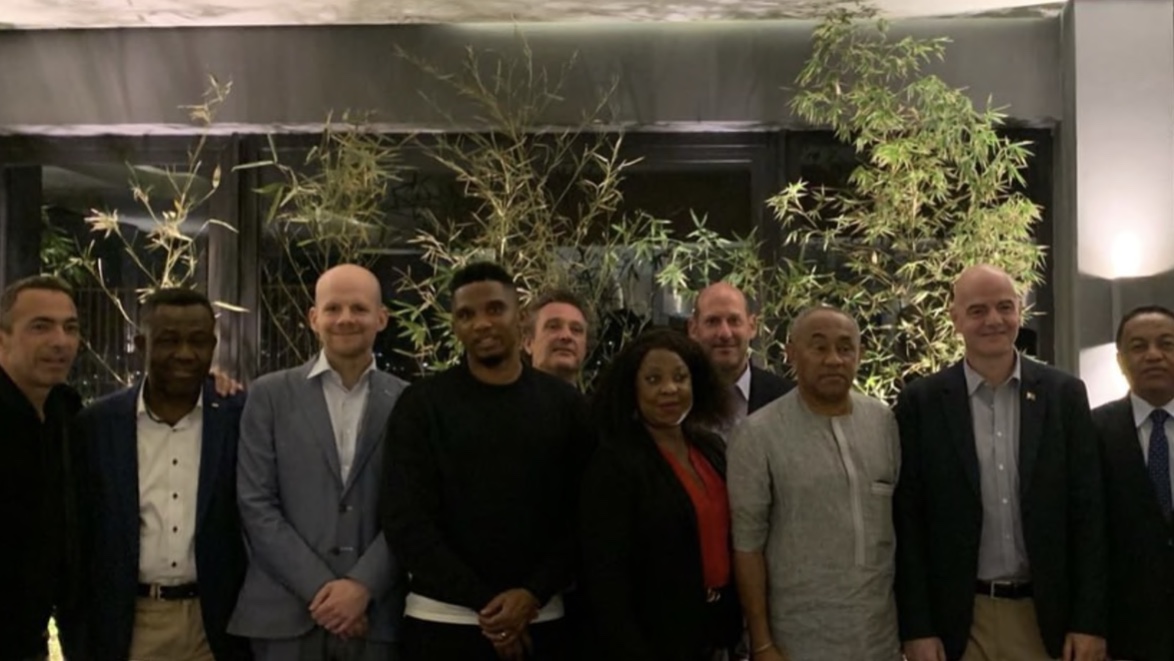 COALITION OF CORRUPTION: The faces behind all the theft at FIFA.

So corrupt is the FIFA President that he has prevailed upon the Ethics Committee to halt any and all investigations on CAF President Ahmad Ahmad, and his inner circle comprising of FIFA Council Members Hany Abourida, Constant Omari and Morocco FA President Fouzi Lekjaa, who are accused of embezzling $24 million, enabled with the aid of another Moroccan Mouad Haji who until recently was the CAF Secretary General.

The criteria of disbursement of the $2.5 Billion as announced by FIFA last week, raises questions on who exactly is a football professional, and who qualifies to apply for the grant. Is the fund exclusively for FA Presidents from CAF and CONCACAF to pilfer? Can footballers, technical staff, journalists, intermediaries, researchers, analysts and others who have been rendered jobless by the halting of football activities, also apply for relief funding? And will they contact the same FA’s who have outstanding audit and compliance issues for the money?

This is the unfortunate risk posed by the mindless actions. of the FIFA President, who continues to sink football to new lows, whilst posturing in media for cheap publicity and attention.

UEFA President Aleksander Ceferin has risen to the occasion, to ask the difficult questions which compromised journalists depending on handouts from FIFA have refused to ask. Speaking to ZDF Sports Studio, Ceferin has casted doubt on the operationalisation of the fund, due to the lack of control and oversight.

“FIFA’s explanation was that they want to use it for those who urgently need it. We should agree to this so that FIFA can then decide who gets how much money. In my opinion, that’s a little strange,” Ceferin said adding that it would be dangerous that only FIFA would manage this fund without oversight or accountability.

Indeed, the Corona Virus Pandemic has opened the doors for criminals to re-inject their proceeds of crime in the legitimate financial market and Gianni Infantino wants to exploit the state of emergency and eased financial restrictions to move as much money to criminal elements like CAF President Ahmad Ahmad, where he would have easier access to it, than when its in Europe.

Ironically, stakeholders have previously questioned why FIFA keeps many billions in its financial reserves, instead of ploughing it into meaningful legacy projects. Fatma Samoura has previously bragged about how her austerity measures including removing bottles of water from meeting rooms and asking FIFA staffers to carry their own water from home, has resulted in a healthy bottom line leading to $4 Billion cash reserves. She also takes pride in restricting spending for delegates during FIFA meetings where instead of chauffeur driven personal vehicles, she introduced buses and vans to ferry FA Presidents.

There is no way you can convince individuals who have functional white matter between their ears that reducing daily allowances for FA Presidents from $1,250 to $125 per day for a two day FIFA Congress will result in significant savings. That money is barely a million dollars, for an institution which brags having $4 Billion in cash reserves. Gianni Infantino probably spends $10 million on private jets alone.

While those superficial measures are meant to placate emotional journalists for rosy headlines, we all know that FIFA money was and is never lost in such small expenses occurring once an year, but rather actual theft through dubious tenders or consultancies, plus questionable TV rights deals. So anyone telling us that restricting FA Presidents from having a chauffeur for just a two-day meeting annually, is just playing cheap politics.

In light of these glaring inconsistencies by the FIFA President Gianni Infantino, it is imperative for the FIFA Council to explore ways of passing a motion of no-confidence before the $2.5 Billion is diverted into dubious bank accounts, controlled by corrupt football administrators under his political protection. We hope that UEFA, CONMEBOL AND AFC can unite for the sake of football, and slay this monster of corruption, as they also battle Corona Virus.

Both Gianni Infantino and Corona Virus should be eradicated from football completely.

WE ALL KNEW THAT ROT EXISTS IN SWITZERLAND, BUT GIANNI INFANTINO TAKES THE CAKE

Infantino has removed a democratically elected national executive in Trinudad and Tobago after the incumbent, who supported him in the Fifa presidency election. lost his bid to remain in office. Questions have also been asked about US $18 million given by Fifa to the past TTFA to build a “home for football” which was later classed as a “hotel” but can’t be opened because it flouted building codes and is a fire hazard. The “hotel” was ceremoniously opened by Infantino before the election when his biggest supporter, David John-Williams, was booted out.

WHY INFANTINO HATES PLATINI AND THE MISUSE...

SWISS JUSTICE WILL CRACK DOWN VICIOUSLY ON...