Was Michel Platini Set Up By The Swiss Prosecutor To Pave Way For Gianni Infantino?

written by admin August 15, 2019
This article is also available in the following languages:
FacebookTwitterInstagramTelegramEmail 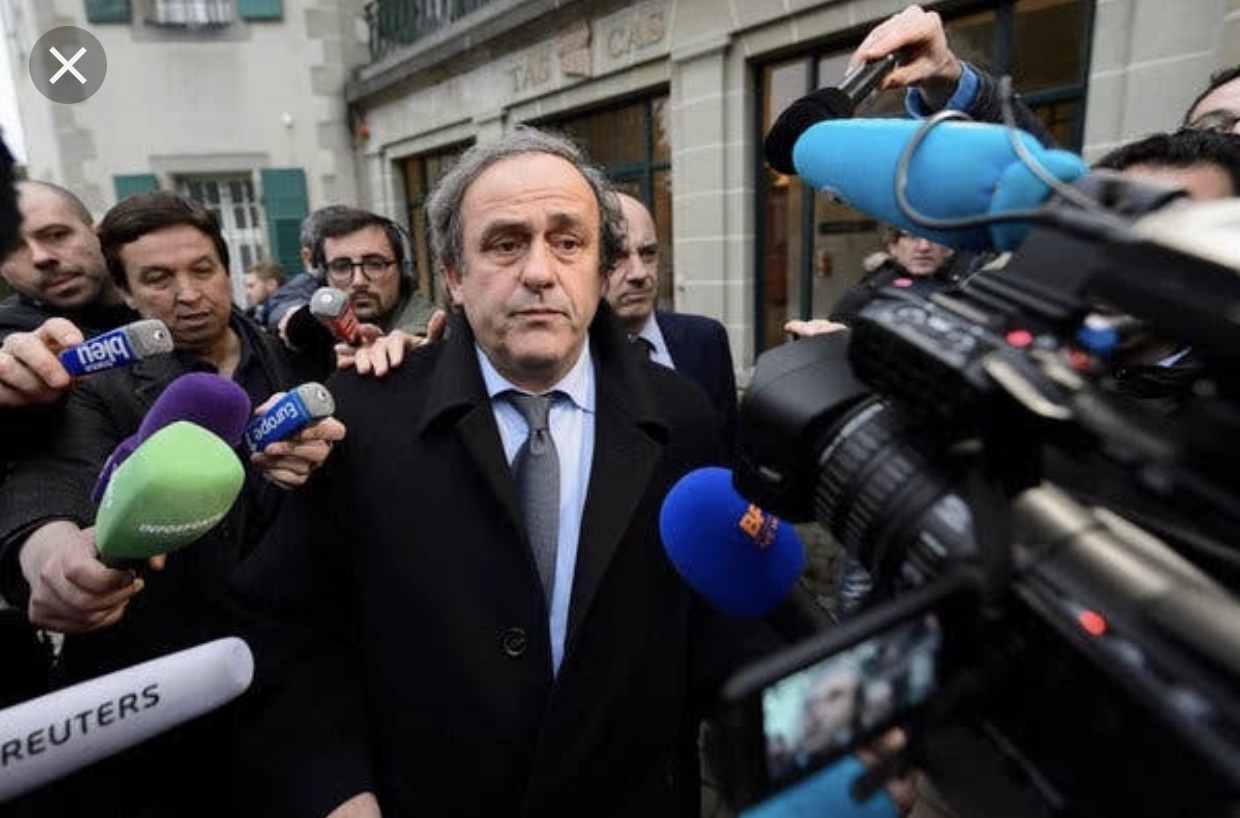 Heir apparent and celebrated French footballer Michel Platini was poised to take over from long serving Swiss Sepp Blatter as President of FIFA. But events and circumstances which transpired in 2015, coupled with recent happenings in the French city of Paris, indicate a sinister correlation. Without a shadow of doubt, it is emerging that Gianni Infantino is pulling strings at both the Swiss Prosecutor’s office and the French Police.

For starters, on 25th September 2015, the Swiss Prosecutor Michael Lauber publicly announced that both Sepp Blatter and Michel Platini were under investigations for an alleged “disloyal payment” of $2m sent to him by Sepp Blatter. A few weeks later, both him and Blatter were banned by the FIFA Ethics Committee, barring him from eligibility in the Presidential Elections.

Michael Lauber has since been forced to recuse himself from any and all investigations pertaining to FIFA after it emerged that he held three previously unknown and undocumented meetings with Gianni Infantino, contrary against institutional ethics and regulations. It is because of the opportunity which Lauber created that Gianni was able to rise from the ashes like the proverbial phoenix, and ascend to higher glory from just a backroom desk job as UEFA Secretary General.

Fast Forward to November 13th 2015 and Gianni Infantino, then Secretary General of UEFA flew to Antananarivo under the guise of watching Madagascar vs Senegal WorldCup Qualifier match, but essentially to have a private meeting with Ahmad, who later introduced him Fatma Samoura, then a UN Country Representative.

This year on 26th May, French publication Le Monde quoted a letter from the Swiss Public Prosecutor Cedric Remund stating that Platini was no longer a person of interest in the case.

On 14th of June of this year, New York Times Sports Correspondent Tariq Panja published an exclusive interview with Michel Platini, which he conducted at the Peninsula Hotel in Paris. In the article, Platini vaguely hinted of his intention to clear his name, have his suspension lifted and probably take a shot at the FIFA Presidency in the near future. He did not have kind words for Infantino.

But barely 4 days later on June 18th, Michel Platini was “detained” for questioning by French police over amongst other issues, the awarding of Qatar’s WorldCup bid and the 2016 European Championship to France. Find it strange? Well probably not. It could just be normal police work and nothing to raise eyebrows over. 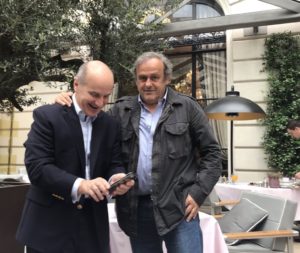 Let’s rewind back to September 2018. During a Confederation of African Football (CAF) Executive Committee meeting (date and venue not important), it was ruled that the rights for Qualifiers for the FIFA WorldCup Qatar 2022 will revert back to individual FA’s and not sold through the centralized system, allowing each FA to source for their own commercial and broadcast partners.

A month later on 26th October 2018, Gianni Infantino was switching gears and changing lanes as regards to a radical new proposal which would alter the landscape of global football, with the introduction of a new Nations League, plus mortgaging of FIFA’s historical archives to the Saudi’s. He was making the pitch in Rwanda during a meeting of the FIFA Council, where the proposal was shelved pending review by a Taskforce of Confederation Presidents, commonly referred to as the FIFA Bureau. This was his way of out-gunning UEFA President Aleksander Ceferin who emerged as the main opponent of the proposal.

In that regard, the next FIFA Council meeting in March this year, more or less endorsed the new competition even though it needs further fine-tuning and consensus building. The Bureau had successfully been (mis)used to achieve Gianni’s objective.

Fast Forward to June 6th 2019 and CAF President was “arrested” in Paris on questions relating to his financial impropriety in relation to a phantom company Tactical Steel, which supplied sports equipment to CAF at values inflated by over 200%. His arrest was identical to Platini’s with both being held for slightly over 10 hours, and later released without charge. It almost looked like a staged arrest to cause uproar and enable Gianni use it as justification for a hostile takeover of CAF.

Or maybe not. Just a product of people’s active imaginations.

To The Rescue: Gianni the knight in shining armour.

One week later, FIFA President was quoted by French paper Lequipe stating that he is under pressure to “act” on CAF from many quarters including African FA Presidents.

5 days later and on the eve of the kickoff of the Africa Cup of Nations, the CAF Executive Committee met and deliberated a proposal relating to a joint collaboration which would see FIFA Secretary General Fatma Samoura sent to Cairo to act as “Special Delegate”.

On the same night, an email from FIFA President to the FIFA Bureau of the Council, gave them an ultimatum of 8 hours to approve a proposal of dispatching Fatma Samoura to CAF as “Special Delegate” with the usual rumblings coming from UEFA President Aleksander Ceferin. As had been hinted earlier, Ceferin’s noise is staged but not meant to stall anything despite the obvious power and influence he wields.

It’s a psychological tactic. Noise creates room for a vote leading to consensus. Ceferin is serving a purpose whenever he makes his loud lamentations, without any ensuing action.

Fast Forward to August 1st 2019 and Fatma Samoura arrived at CAF Headquarters in 6th October City Egypt, for a familiarisation and introduction tour. She pledged to work closely together with President Ahmad and the staff in governance reforms. Amongst what was initially announced was a Forensic Audit to be conducted by her team of “experts” who had flown in with her from Zurich.

But alas! On 13th August, the world was shocked to learn of a letter ordering Football Associations to concede all Television and Commercial rights to FIFA, for WorldCup Qualifier matches for the year 2022 and 2026. Turns out that governance reforms and a forensic audit were the last things on Gianni Infantino’s agenda with his sights trained firmly on the forceful acquisition of all commercial assets of CAF. 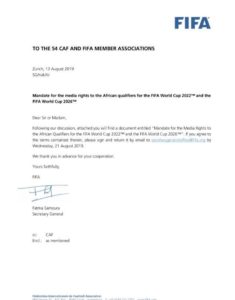 Letter from Fatma Samoura ordering African FA’s to cede all Television and Commercial Rights to FIFA in 8-days or else…….

On 14th of August, FIFA through its legal representation applied to be enjoined in the case filed by banned Liberian Executive Committee Member Musa Hassan Bility vs Confederation of Africa Football (CAF) at the Court of Arbitration of Sports (CAS). Its the first time in the history of FIFA that this is happening. Gianni Infantino is planning to make a personal appearance in court, so as to intimidate, influence and bribe judges into ruling in his favour.

Gianni has successfully used this strategy when he was the unwanted guest at the CAF General Assembly last month, where he intimidated, coerced and blackmailed FA Presidents into endorsing his proposal for a hostile takeover, without much resistance. Just like he influenced and bribed Michael Lauber to do his bidding and ensure Platini was eliminated as a threat, he is poised to do the same with the Court of Arbitration for Sport judges beginning with its President.

Indeed, Switzerland seems to be the hub of sports corruption.

The above series of events shows that nothing happens by accident when it comes to Gianni Infantino. His meddling with the elections of CAF and UEFA were strategic and very calculated in the grand plan to capture football and mortgage it to vested interests. Some people claim that he’s an agent of the Italian mafia, others claim that he is a project of betting syndicates while others say he’s a Saudi mercenary.

Bottom line is that he is very calculative, conniving and will stop at nothing to achieve his selfish end. Welcome to the new football era!

ISHA JOHANNSEN – A VIRUS THAT HAS...