Top Posts
TIS THE SEASON: CAF ELECTIONS – LIFE AND DEATH BATTLES
WHO WILL MOVE THE VOTE OF CONFIDENCE IN INFANTINO AT THE SEPTEMBER 18TH FIFA CONGRESS?
BILITY’S PROPHECY: INFANTINO HAD NO INTENTION OF RESIGNING AFTER CRIMINAL INDICTMENT
BRING IT ON! INFANTINO DARES SPECIAL PROSECUTOR STEFAN KELLER TO ARREST HIM
SWISS JUSTICE WILL CRACK DOWN VICIOUSLY ON FIFA IF INFANTINO REFUSES TO RESIGN
CAF ELECTIONS 2021: A BURIAL CEREMONY OR WITNESS TO A RESURRECTION
BANANA REPUBLIC: SWISS CORRUPTION FIGHTING BACK WITH LEGAL TECHNICALITIES
EMILIO GARCIA SILVERO: MEET THE MAN SET TO DELIVER BRIBES TO SPECIAL PROSECUTOR STEFAN KELLER
BANANA REPUBLIC: SWITZERLAND TRIES TO REDEEM ITS ROTTEN REPUTATION AND LEGACY OF CORRUPTION
TIME HAS COME TO START THINKING OF A WORLD WITHOUT FIFA
Home Featured AHMAD CAMPAIGNS: Meet The Ghanaian Tenderprenuer Who Insisted On Meeting Gianni Infantino Before Financing Elections
Featured

written by admin August 26, 2019
This article is also available in the following languages:
FacebookTwitterInstagramTelegramEmail

As you may have noticed by now, both Gianni Infantino’s and Ahmad Ahmad’s campaigns bear glaring similarities which can be debunked with the naked eye. It baffles us why European investigative media struggle so hard to reveal the true nature of Gianni, even in instances where Football Leaks has literally presented the evidence to them on a silver platter.

As reported exclusively on this site, Gianni Infantino met Fatma Samoura on 13th November 2015 in Antananarivo, during a football qualifier match pitting Madagascar vs Senegal. That’s where this (uh)holy Trinity was birthed leading to the downward spiral of the Confederation of African Football (CAF) which is now financially bankrupt and structurally compromised.

In 2017, word emerged that a quiet, unknown member of the CAF Executive Committee called Ahmad Ahmad had thrown his hat in the ring and submitted his name as a candidate for CAF Presidential elections. In September 2016, Djibouti FA President Ousman Waberi had unsuccessfully moved a motion, to nullify an amendment to the CAF statutes, requiring ExCo membership as eligibility criteria of the candidacy to the Presidential elections.

This particular amendment was passed at a heated Special General Assembly in Mahe, Seychelles in 2012, and engineered by some of Ahmad’s erstwhile loyalists like Congo FA’s Constant Omari. It was viewed as a move to install former CAF President Dr. Issa Hayatou as President for-life. The only member who publicly voiced their concern over this affront to democracy was Tanzania’s Leodengar Tenga.

During the 2016 amendment, Ousman Waberi had sought to expunge this clause from the statutes so as to enable anyone the eligibility of vying for the Presidency. The night prior to the vote, there were side meetings and then Executive Committee (ExCo) member Kwesi Nyantakyi had backed the resolution in principle. But FA Presidents were shocked when he sneaked out of the congress hall, pretending to attend to a call of nature, but essentially betraying his colleagues, in what has become norm as institutionalised treachery within football circles.

Nyantakyi would get a chance to redeem and reinvent himself in subsequent months.

At the end of February and beginning of March 2017 barely 15 days to the CAF Elective General Assembly in Addis Ababa, FIFA President embarked on a 9 country, 10 day visit to Africa under the guise of “assessment of the FIFA Forward Program” according to a statement on the FIFA website. He begun his trip to South Africa, before proceeding to Zimbabwe for the birthday of the then noisy FA President Philip Chiyangwa. He then visited Swaziland, Zimbabwe, Uganda, Rwanda, Chad, Ghana, Niger and Mauritania.

It is the visit to Ghana on 27th February 2017 which was the most critical and crucial in firming up campaign plans for the CAF Presidency.

When it comes to football elections in Africa, be it local federations or CAF level elections, money plays a crucial part. Without money, winning an election is next to impossible. And while in other parts of the world financial resources are needed for logistics and communication purposes, in Africa money goes into direct bribery of the voters. 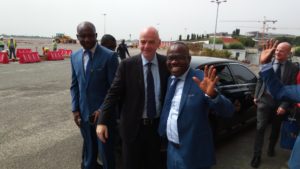 Gianni Infantino upon arrival at Accra Airport, and met by banned Kwesi Nyantakyi and George Afriye. Gianni was accompanied by Matthias Grafftstrom, accused of blackmailing FA Presidents in Africa to either toe Gianni’s line, or die.

Gianni Infantino at the time was walking on a short leash of his Ethics Committee, which he later overhauled and replaced. His hands were tied and he was not in a position to offer direct monetary aid to his friend Ahmad Ahmad. So funds had to be raised internally. Nigeria FA President Amaju Melvin Pinnick had pledged $ 1 Million from Nigerian benefactors, but the money never came through with many suspecting that he pocketed the monies he collected. As the saying goes, the only trustworthy Nigerian is a dead one.

Kwesi Nyantakyi finally got the opportunity to redeem himself by pledging $500,000 into Ahmad’s campaign. The only collateral needed was for Gianni Infantino to visit Ghana and meet the donor personally.

Meet Kwabena Boateng-Aidoo, a Ghanaian mercenary and tenderprenuer, whose deals are shrouded in various scandals and legal shenanigans, due to the sheer numbers involved. Kwabena was introduced to Nyantakyi by then Ghana FA Vice President George Afriye, associated with local football club Liberty Professionals FC. In Ghana, his companies including Santa Baron Ventures, Apex Consulting Services Limited and Solar Ghana Limited have been described as “sleezy, shady and shifty”. 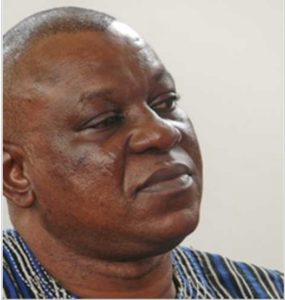 Mercenary and tenderprenuer Kwabena Boateng-Aidoo, the man who financed Ahmad Ahmad’s CAF Presidential campaigns to the tune of $500,000.00.

Kwabena shares close ties with the Head of State of Ghana Nana Akufo-Addo who at one time, made an executive order for 55 armoured fuel guzzlers to be delivered to Government officials (including his own motorcade), plus a separate tender for the improvement of Ghana’s security infrastructure for a whopping $300 Million. Such mind-boggling figures from a poverty-stricken nation like Ghana further proves why Africa continues languishing in 3rd world status.

Upon arrival of Gianni Infantino in Accra, he was met at the airport by both Kwesi Nyantakyi and George Afriye, who then proceeded to whisk him to Jubilee House, the official office and residence of the Head of State. They were joined by controversial mercenary and tenderprenuer Kwabena Boateng-Aidoo, who upon meeting Gianni Infantino and getting convinced that the campaigns for Ahmad Ahmad had his blessings, personally handed to him a briefcase containing $500,000.00. 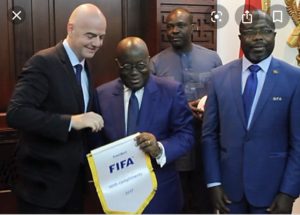 Gianni Infantino had achieved his objective during the Africa mission.

The money was placed under the care of Kwesi Nyantakyi who then flew it via a diplomatic bag to Addis Ababa for distribution to FA Presidents at the Radisson Blu Hotel, where Team Ahmad had pitched camp, away from the prying eyes at the main hotel for delegates, the Hilton.

More money was availed from South Africa and Morocco, as FA Presidents reaped a bountiful harvest from that mission, all with the knowledge and full permission of FIFA President Gianni Infantino.

For their tireless efforts, Kwesi Nyantakyi was rewarded with appointment as CAF Vice President while George Afriye was appointed into the AFCON Committee. With CAF and FIFA, its about how much you pay, not necessarily what value you have to bring to the table.

A Case Of Legends And FIFA’s Double Standards: Kalusha Bwalya vs Michel Platini

SWISS JUSTICE WILL CRACK DOWN VICIOUSLY ON...

UEFA MUST TOPPLE INFANTINO OR KILL THE...